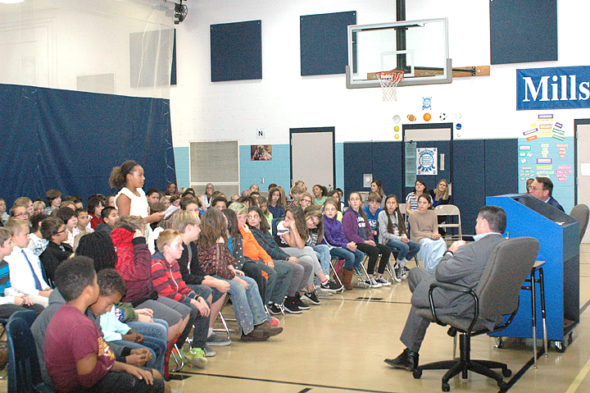 Election Day is just a week away, and students at Mills Lawn School, while not yet of voting age, recently grilled two area candidates on the issues.

Fourth, fifth and sixth graders gathered in the gym last Friday for a Town Hall-style meeting to talk politics with the contenders for the state representative seat for the 73rd district, incumbent Rick Perales, a Republican, and Democratic challenger Brian Housh (brother of Mills Lawn Principal Matt Housh). Fifth and sixth graders had prepared 10 questions for the candidates reflecting the concerns they have in this election, according to fifth- and sixth-grade teacher Jody Pettiford, who organized the event.

Questions homed in on a range of timely issues, including candidates’ educational proposals, environmental concerns, views on current gun laws and reactions to recent police violence against African Americans. A couple of questions asked candidates to reflect on how best to resolve differences and work together.

“This is a wonderful opportunity to participate in democracy,” Pettiford told the students as the event was wrapping up. “Right now you can’t vote but soon you’ll be able to,” she said.

Both candidates praised the students’ knowledge of the issues — a hopeful indicator that the next generation of voters is coming up informed, thoughtful and engaged.