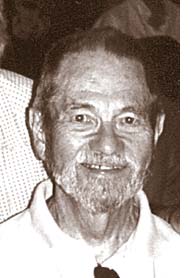 Edwin (Ted) Chase Weatherup passed away peacefully on Nov.. 21, 2016. He was born in Springfield, Vt., on May 4, 1932, to Donald Gordon Weatherup and Elizabeth Chase Weatherup. Ted graduated from Springfield High School in Vermont in 1950 and Antioch College in Yellow Springs in 1955. He lived in the Yellow Springs area for the rest of his life, except for a semester co-opping in New York City at NBC Studios, and two years in Washington, D.C. during the Korean War, where he clerked at the CIA for the U.S. Army.

After his honorable discharge, Ted returned to Ohio where he worked briefly as a mechanic at Seeley Turner Automotive, and thereafter as a writer. He wrote copy for Odiorne Industrial Advertising of Yellow Springs, then as a freelance copywriter in his business, The Wordshop, also of Yellow Springs, and for Willis Case Harwood in Dayton. He retired from WCH as vice president in 1997. Ted loved his retirement, observing the first week: “I was born to retire.”

Ted inherited from his father a love of cars and sports, and from his mother a love of reading and writing. For his own pleasure, he wrote fiction, prose and poetry. His poem, “Lindner at the Bat” — a parody of “Casey at the Bat” lampooning the former Cincinnati Reds owner Carl Lindner — was published by the Dayton Daily News, and his short story about a young NBC intern’s encounter with Marlene Dietrich won “Best In Show” in the Antioch Writers Workshop creative writing contest.

Ted loved sports, cheering on the Bengals, the Reds, the Dayton Flyers and the YS Bulldogs. He loved humor and making people laugh, from childhood to his last days. In high school he wrote and performed comedy sketches; in his middle years, he performed comic roles for YS Center Stage audiences. All the days between and after, he entertained his family and friends with jokes, punning and word play, including at the end of his life, making his doctors, hospice nurses and aides chuckle and guffaw.

Ted also enjoyed traveling, sailing and cruising; attending car shows with friends; doing the New York Times crossword puzzles; and the company of his family and his many lifelong friends.