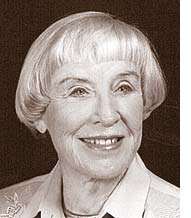 Dorothy Hatfield Mitchell Gish passed away at the age of 97 on Jan. 5, 2017, at ActivCare Bressi Ranch in Carlsbad, Calif., where she had lived this past year. She had previously resided at Carlsbad by the Sea Retirement Community for four years and before that for decades at High Country Villas in Encinitas with her late husband, William Gish Jr.

Before moving to Encinitas, Dorothy had lived for 40 years in Yellow Springs with her now-deceased first husband, James Mitchell.

Dorothy was born in Danville, Ky., on Oct. 19, 1919, the oldest daughter of Asa and Dora Hatfield. She grew up in this small town along with her younger sister, Mary Frances, and brother, Alvin. Dorothy was a very high achieving student, graduating from the University of Kentucky, where she received her bachelor’s degree in political science. After college, she moved to Yellow Springs to help the World War II effort as a secretary at Wright-Patterson Air Force Base. There she met her future husband, James Mitchell. After marriage they settled in Yellow Springs where Dorothy quickly immersed herself in the Yellow Springs and Antioch College community. She was one of the founders of the Yellow Springs Community Foundation, which she continued to support.

Dorothy was passionate about her interests. She was an excellent pianist and would often play and sing for her church choir. She loved to travel and saw most of the world. She was an avid golfer and played golf into her 90s. She tutored foreign doctoral students at University of California San Diego for over 20 years. She and her second husband were married 28 years and were active supporters of the San Diego Zoo, Encinitas YMCA, Scripps Institute, San Diego Botanical Gardens, San Diego Symphony and many other causes.

Dorothy’s daughter, Molly Mitchell Darcey, died unexpectedly in 2002. Her first husband, James Mitchell, passed away in 1973. Her second spouse, William Gish, Jr., died in 2012. Her stepson, William Gish III, died in August of 2016. Dorothy is survived by her niece, Alice Martin; her step-daughter, Andra Moran; and step-sons Stuart Gish and wife Katie Gish, of Ventura, Calif., Reverend David Gish and wife Jennifer Gish, of Wilton, Conn.; her grandchildren, Katie, Troy, Christopher, Carolyn, Amanda (Mandy), Kayla and Kristina; and her great-grandchildren, Destiny, Liam and Grace. A memorial service was held at the Bethlehem Lutheran Church in Encinitas on Jan. 17. According to her wishes, the scattering of her ashes at sea will be held at a future date. In lieu of flowers, please send your donations to the Bethlehem Lutheran Church.