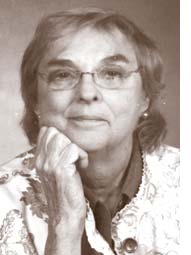 Janet Turner Munson of Birmingham, Mich., passed away peacefully at home on Jan. 12, 2017, at the age of 83. Janet was a longtime resident of Yellow Springs, attending Antioch College and raising her family in the village.

Janet was preceded in death by her husband, James Munson, and a son, Russell Turner. She is survived by her twin sister, Joanne Curtis, of Bloomfield Hills; sisters Lois Coover (Chris), of Montclair, N.J.; and Dr. Roberta Adams (Andy Glantz), of Scottsdale, Ariz.

Janet Turner Munson was born April 28, 1933 in New York City, N.Y., to Arthur Eugene Adams and Lois Freeze Adams. She graduated from A.B. Davis High School in Mount Vernon, N.Y., then went on to Antioch College and earned a bachelor’s degree in early childhood education. After a career as a teacher in Yellow Springs, Janet married Jim Munson and moved to Ferndale, Mich. in 1973. She worked as a child care director and went on to conduct accreditations of child care centers for the National Association for the Education of Young Children (NAEYC).

A memorial service will be held on Saturday, Feb. 4, at First Presbyterian Church, located at 1669 West Maple Road, Birmingham, Mich. at 10 a.m. with a reception to follow. In lieu of flowers, the family requests donations be made to the Skyline Camp and Retreat Center, 5650 Almont Road, Almont, MI 48003 (www.campskyline.org). View full obituary with additional information at http://www.simplefunerals.net.