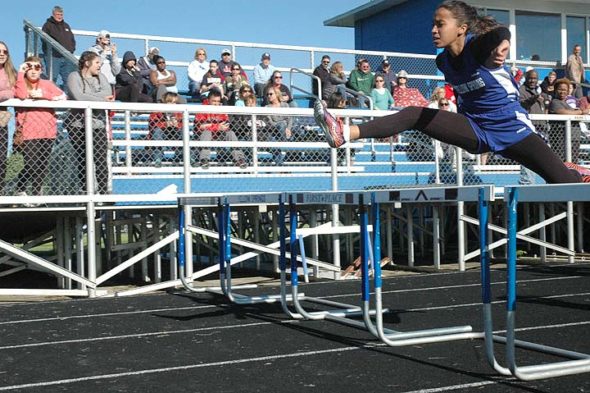 Yellow Springs High School hurdler Julie Roberts broke ahead of the pack at the Bulldog Invitational on May 8. Roberts took first place in both the 100-meter and 300-meter hurdles. (Photo by Dylan Taylor-Lehman)

The Yellow Springs girls ran, jumped, threw and hurdled their way to first place overall among nine teams at the Bulldog Invitational on Monday, May 8. The day was clear, the skies blue and the girls’ performances stellar.

Out on the field, Payden Kegley took second in the pole vaunt, launching herself 7’6”. True Hall jumped 4’8” to take second in the high jump. Olivia Brintlinger-Conn jumped 14’3.5″ for third place in the long jump. Amani Wagner and Jasmine Davidson took second and third in the shot put, throwing a heavy metal ball 33’0.5” and 32’4.5” respectively. And Amani Wagner easily took first in the discus, throwing the UFO-like platter 108’6”, 22 feet further than the second place finisher.

The Bulldog boys also took a number of spots in the 3200-meter race, with Sam Wildenhaus, Zach Lugo and Eli Capasso taking second, fourth and sixth places, respectively. James Browning took first in the high jump, leaping 6’2” to the top. Joe Plumer ran and jumped 18’5.5” and earned himself second place in the long jump. James Browning likewise earned a first in discus for the Bulldogs, throwing the disc 126’8”.

See the full sports report in the May 11 issue of the News.