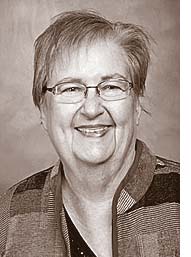 Joanne Risacher, 75, of Yellow Springs, formerly of Loogootee, passed away at 8:56 a.m. Tuesday, May 9, at Hospice of Dayton.

She was born January 29, 1942, in Loogootee, Ind. to the late Joseph C. and Marcella (Michaels) Risacher.

Joanne was a graduate of St. John High School in 1960. She then received her bachelor’s degree in English from St. Mary of the Woods College, master’s in counseling from Indiana University and her Ph.D. in higher education administration from Ohio University.

Some of Joanne’s many accomplishments include head resident of University of Wisconsin, Oshkosh, August 1966–1968, resident advisor at Northern Illinois University 1968–1971 and faculty member at Ohio University. In 1971 she began her career as a faculty member at Wright State University and worked until her illness. At Wright State she held several capacities including Assistant Dean of Students, Director of Student Development, Assistant Vice President of Student Life, Senior Student Affairs Officer, Assessment Project Director and Director of the Student Affairs in Higher Education Master Program. She also taught many courses in student affairs in the Higher Education Graduate Program and held a faculty member position in Leadership Studies Department.

Joanne was preceded in death by her parents, Joseph C. and Marcella (Michaels) Risacher; and brother, Donald (Doris) Risacher.

A Mass of Christian Burial was celebrated by Rev. J. Kenneth Walker on Friday, May 12, at St. John the Evangelist Catholic Church in Loogootee. Burial followed in the church cemetery.

Visitation was held Thursday, May 11, at Blake Funeral Home in Loogootee.

A memorial service for Joanne will be held at Wright State University in the fall.

Condolences may be made online at http://www.blakefuneralhomes.com.

One Response to “Joanne Risacher”