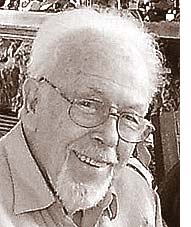 Dr. Stave passed peacefully on April 19, 2017, at his home, surrounded by family. He is survived by his wife of 70 years, Lise-lotte; his children Holger (Julie), Christoph (Mary Beth), Caroline (Jane) and Simone (Alvaro); 15 grandchildren and 11 great-grandchildren.

Uwe was born Feb. 4, 1923, and grew up in Hamburg, Germany, surviving WWII despite being permanently wounded while having to serve on the Russian front. Upon his recovery, he met his wife, Lotti, at rehearsals for the Oberufer Christmas plays in Hamburg in 1945. He then enrolled in medical school. His dedication to children and the welfare of the new-born brought him to the world of medicine, where his research and contributions were international. His first position brought him to Marburg, Germany, where he practiced and developed his research at the Pediatric Hospital. Both Lotti and Uwe were strong believers in the anthroposophical movement and the work of Rudolph Steiner. Dr. Stave focused on studying anthroposophical medicine on his own, which ended up being very influential in the movement and his later life.

His research publications caused his invitation to conferences in the United States, which led to an invitation to work at Fels Institute working on Longitudinal and other research studies, in Yellow Springs, Ohio, from 1961 until 1975. Dr. Stave’s dedication to anthroposophy and children and their future was total. His family enjoyed him through his love for woodworking, gardening, car trips, traveling to many parts of the U.S. continent and also trips abroad! In 1975, Lotti and Uwe moved to Miami, Fla., where Dr. Stave worked at Jackson Memorial Hospital building the Neonatal Intensive Care Unit and teaching at Miami University, until 1979.

As a pioneer spirit in the anthroposophical medical movement, he was able to share his knowledge and skills both in the United States and Germany. His work and study in anthroposophy led to his being invited to become the Dean of the Medical School at the Freie Universitaet, Witten/Herdecke, in 1979, and also working as a pediatrician at the Anthroposophical Hospital (Gemeinschaftskrankenhaus) in Herdecke, Germany. Lotti and Uwe lived there for nine years until his retirement in 1988.

With all their children living in the U.S., Uwe and Lotti decided to retire back in the States. They moved to Sacramento, where the Rudolph Steiner College and the Raphael Medical Center would provide both a great opportunity to continue his work through lecturing and helping Lotti as prompter in the four Mystery Dramas. Over the course of his life, his skills influenced upwards of 10,000 infants. Dr. Stave and Lotti’s continuing participation in the activities of the Anthroposophical Society and community has given them a loving support through this time and into the future.

Contributions in his name can be made to the Christian Community Church, 611 Bridgeford Drive, Roseville, CA 95678.