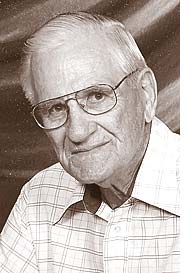 Charles William Hosket, of Yellow Springs, passed away peacefully on Thursday, May 25, 2017. He was 92.

Charles was born on Jan. 30, 1925, in Dayton, Ohio, the son of the late Carl W. and Thelma Hosket. Charles is survived by his beloved wife of 66 years, Patricia (Williams) Hosket; sons and daughters-in-law, Scott and Alicia Hosket and Gary and Shatwanee Hosket; grandchildren Michael (Kelly) Hosket, Nathan Hosket, Jon (Erin) Hosket, Ross (Maggie) Hosket and David (Emily) Hosket; three great-grandchildren; brother and sister-in-law, Ralph and Polly Hosket; sister and brother-in-law, Carol and Paul Clark; and numerous nieces, nephews and fishing and hunting buddies. Along with his parents, he was preceded in death by five siblings.

Charles was a lifelong resident of Yellow Springs and worked many jobs, including working as a barber in the 1960s and later retiring from AC Service. He was a proud veteran of the United States Army who won a marksmanship award and a commendation from the general. Charles was highly athletic and truly enjoyed fishing, hunting and being with his family.

Viewing was held on Tuesday, May 30, at Jackson Lytle & Lewis Funeral Home in Yellow Springs. Service was held on Wednesday, May 31, also at the funeral home. Burial followed at Glen Forest Cemetery. In lieu of flowers, donations may be made in memory of Charles to the charity of your choice. Condolences may be expressed to his family by visiting http://www.jacksonlytle.com.