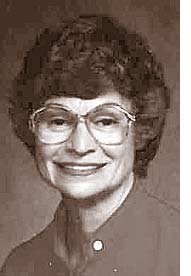 Cordelia “Corky” Tucker Wishart passed away peacefully at Paris Community Hospital Sunday morning June 4, 2017 with her son, Steven Wishart, at her side, following a brief illness.

Corky was born in Chrisman, Ill., on Dec. 30, 1931, the daughter of Freda Henderson Tucker and Walter B. Tucker. The family moved in 1933 to the ancestral home, Maplewood Farm, on the Horace-Brocton Road, where Corky and her four siblings enjoyed rich and rewarding childhoods in rural Edgar County. The chores were many, and Corky says she wished for “rubber arms” so that she could perform them while remaining in bed, but so too were the happy and fun times, many of which she recounted in a memoir of her childhood written a few years ago with the help of her granddaughter, Ellen Geddes. She attended a one-room school in Horace where her outstanding scholastic performance allowed her to skip a grade, then enjoyed a successful high school career at Paris High School, graduating with the class of 1948. Corky finished high school in the top ten percent of her class, earning a Good Citizenship Certificate from the Daughters of the American Revolution while also serving as Student Council president during her senior year.

Corky entered MacMurray College for Women in 1948, earning a degree in primary education with a specialization in kindergarten and first grade. Her first year at MacMurray was interrupted by a severe case of polio, which caused her to miss the entire second semester. Corky recovered fully and completed her degree in the typical four-year span in 1952. During the summer after her junior year at MacMurray, she began to date Charles Wishart, who was a junior at DePauw University. She described Charles as smart, funny and good looking. Having spent part of that summer in Spain, Charles was smitten with her beautiful long, dark hair. They were married on Dec. 28, 1952 while Charles was on leave from the U.S. Army. Corky taught kindergarten at Vance School in Paris, Ill. until she joined Charles, first while he was enrolled in Army Language School in Monterey, Calif., then in Paris, France, where he was stationed for over two years. While in Paris, France, Corky taught kindergarten at an American school attended by children of diplomats, military couples and other Americans living in Paris.

Corky and Charles returned to Paris, Ill. in 1955, where they started a family with David, born in 1956, Anne in 1958 and Steven in 1964. Corky was busy those years as an active member of the Edgar County Women’s Republican Club, as a board member for the Edgar County Children’s home and with home life. In 1964, Corky struck out in a new direction, beginning graduate education at Indiana State University focusing on special education and clinical psychology. She completed a Master of Science degree in psychology in 1968 at Indiana State. Corky taught special education classes in the Crestwood District for several years until she took a job as a clinical psychologist at the Human Resources Center in Paris on Sept. 1, 1970, focusing on counseling young children, family therapy, and couples therapy. She enjoyed a long career at the Human Resources Center during an era when psychological problems began to be viewed as medical problems that could be treated effectively, as opposed to personal failings on the part of the affected individuals. She was a trailblazer as a woman practicing clinical psychology in a field still dominated by men. The work was demanding and stressful and involved long hours, but Corky never let it affect her life at home. She had an uncanny ability to leave work at the office, coming home each evening as a wife and a mother. It was a remarkable juggling act on her part. Corky retired precisely 21 years after starting at the Human Resources Center on Sept. 2, 1991 at age 59.

Corky and Charles led an active life in retirement. She focused on caring for aging relatives; refurbishing and archiving family heirlooms, photos and documents that extend well back into the 19th century; managing spectacular flower beds at 309 Ten Broeck St.; expanding her cooking repertoire to include a variety of French delicacies, traveling often for pleasure and for continuing education at Elderhostels, as well as to all manner of sporting events that often included athletic performances by grandchildren. She became quite a runner in retirement, competing routinely in the Honeybee Festival 5K race, often winning her age group. She and Charles were avid walkers, frequently sighted miles from their Ten Broeck Street and Madison Street homes on an almost daily basis. Corky and Charles immensely enjoyed delivering Meals on Wheels and were active members of the Presbyterian Church of Paris.

Corky’s love for her family was always evident, but never shone so brightly as it did when Charles was stricken with Parkinson’s Disease several years ago. She was the primary caregiver for her husband until the last four months of his life. The devotion that Corky and Charles had for each other was unbounded. They stand as a model for all of us.

In lieu of flowers, the family asks that donations be made to Sarah Bush Lincoln Lincolnland Hospice, the Paris Community Hospital Foundation, and/or the Paris Recreation Center — the REC.