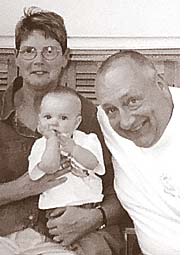 Born in Dover, Ohio on April 21, 1937, Jack grew up in Springfield and later moved to Yellow Springs with his wife of 53 years, Jennie, who survives. Jack is also survived by his children, Jini Cook, of Harrisonburg, Va. and her husband Scott, and Joe Lebold, of Morgantown, W.V. His brother Robert Lebold of Seabrook, N.H. also survives. Jack’s grandchildren, Peyton and Wyatt Cook and Coban Lebold, were the loves of his life.

Jack was an Eagle Scout and was a member of Phi Kappa Psi and attended Wittenberg University and Antioch College. Jack served as a volunteer firefighter for 34 years with Antioch College and Miami Township Fire-Rescue, serving in any way he could including as safety officer and a driving instructor. Vernay Laboratories hired Jack while he was a student at Antioch College in 1959. He worked as a chemist and later in sales until he retired in 2000. While he was employed at Vernay, he developed an innovative series of components for automobile carburetors for which he earned a patent in 1987.

Jack never met a stranger and truly enjoyed serving his community and others. Whether it was driving the fire truck at Halloween and passing out candy bars or cooking bratwurst for Oktoberfest at Ye Olde Trail Tavern, Jack loved lending a hand. He so enjoyed driving Jini and Joe and the Dayton Raider carpool through the rain, sleet and snow to swim practice at all hours in the morning. Jack spent many a weekend “chasing” trains all over Ohio and Virginia. He loved taking the family over to Columbus to watch the Ohio State Marching Band warm up before the football games and then head to Schmidt’s in the German Village.

Jack was truly an old-school character who lived his life through dedication, service and his family. In recent years, he enjoyed watching his grandchildren play soccer and baseball, graduate from high school and explore the Shenandoah Valley. Jack very much lived on his own terms and passed on his own terms and for that we were so very fortunate to have made that journey with him. Jack was simply Jack and he was truly loved and will be missed.