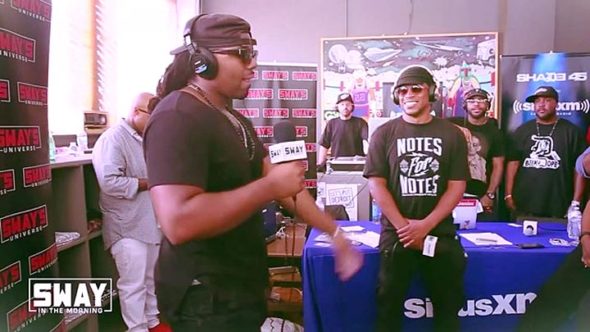 Yellow Springs resident Issa Walker, aka Issa Ali, recently appeared on the influential Detroit radio program “Sway in the Morning,” delivering a spontaneous and well-received rap to an unfamiliar beat. Pictured here are Walker at the microphone, left, and hip-hop giant Sway Calloway, center, with members of the renowned Detroit rap group D-12 in the background. (Submitted photo)

In May of this year, Yellow Springs resident Issa Walker was in Detroit visiting a radio studio owned by legendary rapper Eminem. As the influential program “Sway in the Morning” was live on the air, Walker, who professionally goes by the handle Issa Ali, was offered the microphone in the studio as a beat he had never heard started to play. Issa Ali did not hesitate.

The video of Walker’s freestyle — putting lyrics and technically proficient rap to a beat — cuts off right as D-12, a renowned group from Detroit, and Royce 59, one of Walker’s idols, explode into shouts, a sign of respect in hip-hop.

“Sway put the pressure on me because I’m from Ohio and we were in Detroit. The way he put pressure on me, it was intense,” he said. Pausing, he added: “But I killed it. That’s what Sway do. You either kill it or you get dogged on national radio.”

The Sway in question is Sway Calloway, one of the most important people in hip-hop today. He began his career in the late 1980s as a rapper and b-boy (break-dancer), teaming up with DJ King Tech to record several albums, which in the early 1990s landed them jobs hosting their own radio show on KMEL in San Francisco. Other stations quickly began simulcasting “The Wake Up Show,” and as the years progressed it became for hip-hop what “The Ed Sullivan Show” once was for rock ‘n roll. Sway also has worked for MTV since 2000 and is now a producer for the network.

Walker said he won accolades from Sway and great appreciation from Royce, which Walker referred to as “co-signing.” This is when one emcee acknowledges the prowess of another.

“It was one thing to deliver on such a big platform, but to have Royce co-sign me, that was…” he trailed off, unable to put such an accomplishment into words. Being a wordsmith, that’s not something Walker experiences often.

“You’ve gotta rap about your environment,” he continued, focusing on the contents of his freestyle. “And I love the braggadocio of hip-hop, so I brag about my master’s of public health degree. I brag about my mind. If I can make being educated cool, that’s what I want to do.”

Walker, a 2006 graduate of Yellow Springs High School, holds a bachelor’s of science degree in biology from Central State University, and a master’s of public health from Wright State University. He is a professional fitness trainer at the Antioch College Wellness Center, and is in excellent physical condition himself. He confessed that he wanted to be a doctor, and thought the M.P.H. degree would help secure entry to medical school.

“I’m still way into health and I hope to use my music to educate, perhaps go on lecture tours and talk to kids after I do all this music.” When asked if he might still intend to add “doctor” to his credentials, Walker laughed. “Perhaps, perhaps. You never know with me.”

Walker’s music career has followed the trends of the industry. Full-play albums were once the norm for social consciousness rap progenitors such as Arrested Development, Digable Planets and The Fugees. Walker’s growth as an album artist can be heard from the early cuts by Village Fam, a local hip-hop group, through his second solo offering, “As Above, So Below,” released in 2014. Now he’s focusing on singles and creating professional quality videos, which are available on YouTube. When asked if this was an artistic move or a commercial one, he answered quickly.

“Everything is singles now. People don’t buy whole albums, they just want to put the track on their playlist. So, there’s an industry game to play. And I know how to do it; in a way it is simpler. I know how to write hooks. My beats may sound gansta [referring to a particular subgenre of rap] and like we’re having a party, but the lyrics reflect my consciousness. I’m giving you something that’s real. But also something that’s hot,” he said, smiling.

Walker is mum about his next steps, but with a mischievous smile he said, “Stay tuned.” He’ll be in New York for a month, the place where hip-hop was born. The list of luminaries stretches across all five boroughs, and includes Tupac Shakur, Jay-Z, Nas, Method Man, the Beastie Boys, Lauryn Hill, Lil’ Kim and many others.

“I’m gonna go soak it up like I do whenever I’m in New York. The energy is great.” He paused. “For a while, that is, and then I come back home. I love it in Yellow Springs. I grew up here, and I can think here,” he said.

Walker seems on the precipice of something major. Vague comments about New York, Atlanta and Los Angeles hint at some opportunities in the works. He said he is only going to move forward with the right situation.

“Jay-Z says if you aren’t aiming to be the best, go home. You must believe that you are the best. But you better show people, and then stay humble.”

You can follow Issa on Facebook at Issa Walker IG; watch his videos on YouTube, Isaa Ali *issabeats; or purchase music on iTunes, Spotify, and Google Music.

Topics: Sway in the Morning, rap