Instead of celebrating his birthday, his parents and area activists will be commemorating his life this Saturday, Aug. 5 — three years to the day that Crawford, an African American, was shot and killed by a white police officer in the Beavercreek Walmart. “Remembering John Crawford III” will be held at 3 p.m. in the parking lot in front of the Walmart, facing Pentagon Boulevard. The one-hour program will feature African drumming and dancing from Dayton’s Kuumba Drama Drummers and poetry and spoken word performances from area residents, including local poet Bomani Moyenda, who has led numerous protests of Crawford’s shooting over the past three years. And there will be a balloon launch in honor of Crawford’s birthday — 25 balloons will be released into the air, to float over the Walmart parking lot and away. 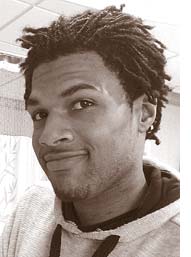 “As long as I’m alive, there will be a memorable event on that property,” Simpson said, referring to the Walmart where Crawford was killed. “It’s one little thing I can do.”

Just 22 years old at the time and the father of two young sons, Crawford was shot and killed by a Beavercreek police officer inside the Pentagon Boulevard Walmart on Aug. 5, 2014. Police were responding to a single 911 report that a black man was carrying a gun and pointing it at people in the store. The gun turned out to be a nonlethal air rifle Crawford had picked up from the store’s shelves, and video evidence showed him holding and swinging the rifle casually at his side while talking on his cell phone. The video also showed that one of the two responding officers, Sean Williams, shot Crawford within moments of encountering him in the store’s pet food aisle. The officers said Crawford did not respond to their commands to drop his weapon.

“What happened, I find it obscene,” said Yellow Springs resident Michael Casselli, who has been involved in many protests of the shooting over the past three years and will be helping out at Saturday’s event. “John Crawford was not doing anything wrong. … His death is one in so many, but it’s local, and we can resist against it here,” he added.

The third anniversary of Crawford’s shooting comes just weeks after Justice Department officials closed their investigation of the case. The federal probe was launched Sept. 24, 2014, the same day a Greene County special grand jury declined to indict the two responding officers. Activists and family members had hoped that the Justice Department review would result in federal charges against Officer Williams, who fired the lethal shots.

But last month, in a statement issued July 11, the Justice Department and the U.S. Attorney’s Office for the Southern District of Ohio declined to prosecute Officer Williams on federal criminal civil rights charges. After nearly three years of investigation, federal officials concluded “that the evidence is insufficient to prove, beyond a reasonable doubt, that Officer Williams violated federal civil rights laws.”

Officer Williams, who had been on desk duty, returned to full duty immediately following the Justice Department announcement, according to a July 18 report in the Dayton Daily News.

Attorneys for the Crawford family denounced the findings of the federal probe. “Unfortunately, the criminal justice system has failed the Crawford family, like so many victims of unnecessary police violence,” the lawyers of the Dayton firm Wright and Schulte wrote in a statement released July 12.

Local activist Moyenda, who led an unsuccessful effort last year to bring criminal charges against the 911 caller in the case, said he was upset — but not surprised — by the outcome of the federal investigation.

“I’m pretty much opposed and disgusted. It was what I expected, but … when it happened, it stirred up a lot of frustration all over again,” he said.

Federal civil rights charges are notoriously hard to prove, according to a May 2, 2017, report in the Washington Post. That’s because prosecutors have to present evidence regarding an officer’s intent at the time of the incident, the report said.

According to the July 11 statement explaining the Justice Department’s decision in the Crawford case, “federal authorities were tasked with determining whether Officer Williams violated federal law by willfully using unreasonable force against Mr. Crawford.” That means, the statement continues, that federal authorities would have to show that the officer acted with “deliberate and specific intent” to break the law in his actions against Crawford. Proving such intent is difficult, as the statement itself acknowledges.

“This is one of the highest standards of intent imposed by law. Mistake, misperception, negligence, necessity or poor judgment are not sufficient to establish a federal criminal civil rights violation,” according to the Justice Department statement.

In other high-profile police shootings of African Americans, such as Michael Brown in Ferguson, Mo., and Alton Sterling in Baton Rouge, La., federal investigators likewise did not pursue charges against the police officers involved.

Asked whether the intent standard set too high a bar in the Crawford and similar cases, U.S. Attorney Benjamin Glassman, whose office took part in the federal investigation, wrote in an email, “Willfulness is one of the highest standards of intent imposed by the law. Certainly, if the statute prescribed a lesser standard of intent, that would be easier to prove.”

Now that the federal probe is closed, the Crawford family’s wrongful death civil lawsuit can proceed. That lawsuit, which has faced delays stemming from the federal investigation, is scheduled to go to trial in February 2018. The family is bringing civil charges against the officers, the city of Beavercreek and Walmart.

“John’s family must put its faith in the civil justice system to obtain some sense of balance and justice for John’s children and his parents,” according to the Wright and Schulte statement.

Attorney Michael Wright and Crawford’s father, John Crawford Jr., could not be reached for comment this week.

Meanwhile, local organizers hope the Aug. 5 commemoration results in a small measure of healing for Crawford’s family and others who care about Crawford’s death. His parents, John Crawford Jr. and Tressa Sherrod, plan to attend, perhaps with Crawford’s two boys, according to Simpson.

Cathy Roma, director of the World House Choir, will be there, leading people in song. “We have a big repertoire for John Crawford,” she said. “We’ve been singing now for three years.” Songs include specially adapted versions of “This Little Light of Mine” and “Which Side Are You On?” The latter song includes the line, “Justice for John Crawford is justice for us all.”

Moyenda, who will read one of his own poems on Saturday, emphasized that the event is a commemoration, not a protest.

“It’s to allow people to gather to acknowledge [Crawford]. The message is, people are still thinking about him.”

Organizer Simpson agreed that the event isn’t an overt protest, after the model of earlier “die-ins” and other actions at the Beavercreek Walmart. But remembering Crawford and grieving how he died is another kind of protest, she believes.

“Keeping his memory alive — in a sense, that’s a protest,” she said. “A family lost their only son. And it’s continuing to happen across the nation. So we do what we can for one who’s dead in Ohio, right in our backyard.”

“Remembering John Crawford III” will take place at 3 p.m. on Aug. 5 in the Walmart parking lot at 3360 Pentagon Blvd., Beavercreek. Carpool groups will be leaving the Coretta Scott King Center on the Antioch College campus at 2:30 p.m. sharp.