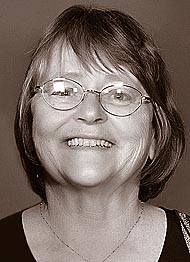 Patricia Kathleen White was born the third of three Irish-American sisters on May 17, 1947, in New York, N.Y. Mary (who preferred to be called Maureen), Dorothy and Pat put themselves through college with scholarships they earned. Pat started out studying political science, but moved on to dance, which she later taught. She first worked in Virginia, but eventually took a position teaching modern dance in the Theatre, Dance and Motion Pictures Department of Wright State University. She was considered a brilliant teacher and choreographer. Pat created or helped create many productions at Wright State, including “1913: The Great Dayton Flood.” Pat’s excellent movement choreography was a key reason for the production’s success, taking the show from the WSU theatre all the way to the Kennedy Center, as part of the American College Theatre Festival. She touched the lives of countless students and colleagues, and left the world a much more wonderful place.

In 1992, she married graphic designer and musician Doug Snyder. Their relationship began in a dance and music collaboration created for Antioch College students and members of the Yellow Springs community in 1987. Doug and Pat celebrated their 25th wedding anniversary this past July 11.

In 2002, Pat and Doug traveled to Vietnam twice to adopt sisters Nguyen Thi Hue and Nguyen Thi Ket, who we know and love as Hue and Ket Snyder White.

Pat’s various interests included committee work for the Yellow Springs Community Children’s Center and The Antioch School. But her real passion was wilderness canoeing. Pat and her friend Janis James traveled to Northern Ontario to canoe through Quetico Provincial Park many times.

There will be a celebration of Pat’s life, at 2 p.m. on Saturday, Sept. 23, at the Unitarian Universalist Fellowship of Yellow Springs, 2884 Route 68 in Goes, two miles south of Yellow Springs. Please bring your stories and recollections.

One Response to “Pat White”