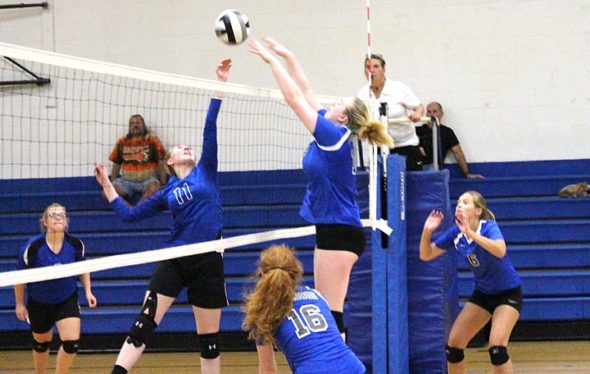 Junior Alex Ronnebaum went up for a block during the Yellow Springs High School girls varsity volleyball team’s three-set win over visiting Middletown Christian on Sept. 5. Ronnebaum — who has yet to commit a service error this season — served for seven points, six aces, and contributed seven kills, two blocks and four digs in the Bulldog victory. (Photo by Zack Brintlinger-Conn)

According to Coach Bill Houchins the Yellow Springs Girls Varsity Soccer team is “improving and heading in the right direction; the addition of six quality freshmen to the squad has definitely added to our play and soccer IQ.”

The Bulldogs had a very exciting game at home versus Springfield on Thursday, Aug. 31. Last season Springfield defeated the team 13–0. This year’s girls weren’t having any of it. The ’Dogs did give up three goals in the first half as Springfield found success attacking centrally with through balls. Due to new defensive tactics beginning in the first half and continuing through the second half, the Bulldogs managed to keep them from scoring again. The girls squad eventually found the net and ended up losing with a respectable final score of 3–1.

The Lady Bulldogs were back in action on Tuesday, Sept. 5, with a game at Northeastern. As with Springfield, last year Northeastern defeated the team by double digits. However, this year’s squad finished on the losing side with a final score of 2–0. The Bulldogs are 0–4–0 thus far, but Coach Houchins states “games are close and very competitive.”

Coach Houchins commented on the crowd turnout during the Springfield match: “The crowd of home fans we had during the Springfield game was awesome, they definitely were our 12th man, as their excitement and energy electrified our play in the second half. We appreciate that show of support, and would love to see that at every game.”

On Tuesday Sept. 6, the Bulldogs competed at the Fairborn Skyhawk Cross Country Invitational. Yellow Springs was the smallest school in attendance as every other school was a Division I school and Bulldogs acquitted themselves in fine fashion.

The high school girls were paced by Jude Meekin who finished with an eighth-place ribbon finish out of 82 girls. Ivy Tebbe finished in 32nd and ran a personal best.

The McKinney boys also navigated the course in fine fashion and were led by Tyson Housh (16th), with strong finishes by Ethan Knemeyer (47th) and Josh Clark (71st) and followed ably by Maddox Flatt, Jason Knemeyer, Liam McLean, Tallis Onfroy-Curley and J.P. Anderson as they managed a 10th-place team finish. The boys race had 128 runners.

When the varsity team hosted Middletown Christian on Tuesday, Sept. 5, they came out strong and determined. They took down the Eagles easily in three sets (25–17, 25–15, 25–12) with every player contributing to the win. Once again, Tyler Linkhart led the team in points, serving up 15 aces, 19 kills, eight assists and two digs. Kelsie Lemons kept the serving game strong with 10 points and five digs. Alex Ronnebaum — who has yet to make a service error — served for seven points of which six were aces. She contributed with seven kills, two blocks and four digs. Emma Ronnebaum dished up 10 assists for the team while Elle Peifer added eight points, two aces, one kill and one dig. Payden Kegley worked hard digging up 21 would be kills while serving five points — all of which were aces — and adding two kills. Elly Kumbusky helped with two digs, Raven James aced for one point and dig, and Amani Wagner came in for a kill and dig.

On Thursday, Sept. 7, the Bulldogs traveled to conference rival Emmanuel Christian. The Bulldogs had not lost to the Lions since 2014 but seemed off their game on Thursday. They kept the score close in sets one and three but couldn’t pull out the win (21–25, 9–25, 23–25). The Bulldogs fought hard, with Linkhart serving up 6 points with 13 kills, six assists, four blocks and seven digs.  Kegley had 4 points, 2 kills, 2 assists and 15 digs while Ronnebaum contributed with four points — 2 aces — two kills, eight assists, one block and 13 digs. The Bulldogs will be looking to pay back the Lions and to show them just how strong they really are when they host them on Oct. 3.

On Sept. 5 the JV lady Bulldogs hosted Middletown Christian and came through with a win in two sets: 25–9, 25–9. Amani Wagner had five kills in the match, Kayla Brown scored with seven aces and Ateerys Wagner served up three aces. The JV traveled to Emmanuel Christian and defeated the Lions in two sets: 25–21, 25–8. Olivia Snoddy contributed six digs and two kills in the win, Indigo Jackson had four kills and one block and Annlyn Foster had three kills and three digs. The next week the Bulldogs hosted Springfield High on Monday Sept. 11. The ladies met tough competition against the Wildcats, losing 16–25, 7–25.

The McKinney Middle School Volleyball team has been hard at work this season. This year’s team, a combination of seventh and eighth graders, is currently 2–3 on the season. This past week the Bulldogs had a hard-fought match against Middletown Christian. The Bulldogs came up short in the nail-biting third set, 23–25. But the team spirit that infused the Middletown match carried over to Thursday’s match against Emmanuel Christian. The McKinney ladies had the gymnasium alive with spirit and momentum as they cruised to victory, 25–13 and 25–14.