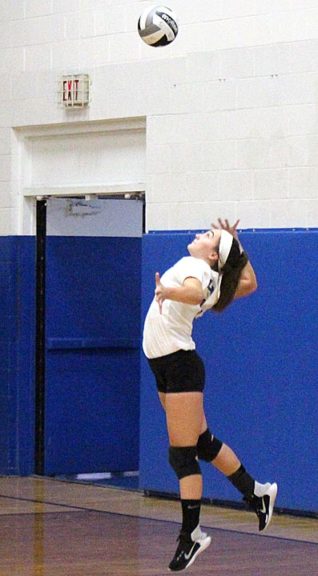 After a four-year hiatus, the Bulldogs returned last Saturday, Sept. 23, to the Bellbrook Cross Country Invitational. This course represents a true cross country course with two creek crossings, trail running, wooded paths, hills and a plethora of other obstacles which our runners were able to navigate without any troubles. The warm temperatures also did not stop the Bulldogs from putting forth a maximum effort.

The McKinney girls team once again ran in a tight formation with support for one another, and ran to a solid fifth-place finish in this big school meet. Bunching five runners among the top 29 in a field of 101 runners was remarkable. Each meet a different runner leads the pack and this time 7th grader Cheyan Sundell-Turner finished in 20th and was followed closely by Sophia Lawson (22nd), Lily Rainey (23rd), Maggie Knopp (26th) and Avery Reeder (29th). Adding depth to this fine performance were Josie Dewine (58th) and Rosemary Burmester (61st).

The McKinney boys were able to parlay a well-earned ninth-place finish. Eight young men started the race in a field of 139 runners. Like his fellow seventh-grader Cheyan, Krishan Miller ran to a 20th-place finish. The Class of 2023 was also represented by Ethan Knemeyer (48th) and Josh Clark (71st). Leif Walters in his second-ever race finished 89th, followed closely by Maddox Flatt (90th). Jason Knemeyer (92nd) and Liam McClean (104th) had great finishes while Joseph Anderson in his first race came in 131st.

Junior Jude Meekin represented the YSHS girls and once again showed great endurance, leadership and stamina with a 32nd finish out of 162 runners.

The YSHS boys team in a field of 217 runners ran to an 11th-place finish in this highly competitive field. Ten runners represented the Bulldogs with four not able to participate due to illness. The one-two duo of Zach Lugo (51st) and Mark Bricker (52nd) showed flashes of brilliance with their stellar performance. Senior Kaden Boutis (119th) and Juniors Eli Capasso (124th) and Raven Campbell (148th) closed strongly at the end of this 5K race. Elijah Naziri ran a best-time-ever, finishing 198th while Jack Runyon in his first race of the year came in 216th. Rounding out the field for the boys were Parker Bleything, Jackson Bleything and Gideon Naziri.

The Bulldogs had a busy week with three matches in three consecutive days.  The team made the most of it by sweeping all three opponents in just three sets each. Starting off the week traveling to Dayton Christian to take on the Warriors, the Bulldogs made easy work of them, winning 25–7, 25–4, 25-4. The Bulldogs showed off some powerful serves that the Warriors just couldn’t handle. Alex Ronnebaum served up some very well-placed balls, keeping the Warriors guessing where she would serve next. Ronnebaum scored 14 points, 8 aces, 3 kills, 2 blocks and 12 assists. Tyler Linkhart kept up the heat with 17 points, 13 aces, 8 kills, 10 assists, 1 block and 4 digs. Senior Elle Peifer joined in the attack with 11 points, 7 aces, 6 kills, 1 block and 6 digs. Defensive specialist Elly Kumbusky racked up 8 points, 5 aces and 2 digs, while outside hitter Raven James added 8 points, 6 aces, 2 assists and 2 blocks. Freshman Olivia Snoddy stepped in to get her first varsity kill of the year.

On Wednesday, the Bulldogs then traveled down the road to Fairborn High School. This matchup is always quite a battle and this night was no exception. The Bulldogs not only won the match in three sets 25–14, 25–15, 25–12 but the large number of Bulldog fans that showed up rocked the Fairborn gym with all their cheering. Kelsie Lemons put on a serving show for the fans, serving up 18 points, 5 aces, 1 assist and 2 digs. Ronnebaum once again stepped in as one of the two setters putting up 9 assists, 11 points, 3 aces, and putting down 8 kills, and she also played a great defensive game, digging up 19 attempted kills. Payden Kegley also worked hard on defense, digging up 17 balls while Linkhart put 13 points, 5 aces, 8 kills on the scoreboard while putting up 7 assists and digging up 11 kill attempts. Dede Cheatom added to the Bulldog run against her former school by putting down 4 kills with 2 digs. James continued her strong serving with 6 points, 3 aces, 2 kills, 3 assists and 2 blocks while Peifer added 1 kill, 1 point, 3 assists and 3 digs.

To end their week, the Bulldogs then took on Troy Christian in the second round of conference matchups. The first meeting between the two teams had the Bulldogs winning easily but the Eagles showed up to the Bulldog gym ready to battle this time. The first set had the Bulldogs controlling the game consistently. The Eagles tried to rally late in the set, but it was too little, too late as the Bulldogs won the set 25–22. Troy Christian refused to give up as they came out strong in the second set. For the most part this second set saw Troy Christian maintaining a 1–2 point lead throughout. There were numerous rallies during the set with neither team willing to easily give up a point. The Eagles were leading 21–18 when Kegley went back to serve to bring the Bulldogs within one point. After several rallies and side-outs the score had the Bulldogs up by one (24–23) with game point on the line. Linkhart was then called for a net foul which tied the game 24–24. After several more long rallies with neither team able to gain control of the game the score was tied at 28–28. Kegley was back in the serving position again and this time the Eagles made two hitting errors allowing the Bulldogs to win the set 30–28. The third set was almost as exciting as the second set with the Bulldogs jumping out to an early lead (6–0) as Linkhart started the second set off serving up 2 of her 7 aces for the match. The Eagles tied up the game at the nine-point mark and again at 20–20 and 23–23, but the Bulldogs seemed in control and pulled out the win 26–24. The entire team helped secure this win with Kegley scoring 9 points, 4 aces, 1 kill, and a season high, 36 digs. Ronnebaum had a great night with 16 kills, 4 points, 1 ace, 6 assists and 9 blocks. Kumbusky had 2 assists and 5 digs, while James had 2 kills, 5 points, 3 aces, 2 blocks and 1 dig.  Peifer and Lemons each contributed 3 kills and 8 digs while Cheatom had a season high 6 blocks. Linkhart ended the night with 11 points, 7 aces, 12 kills, 13 assists, 2 blocks and 11 digs.

Come out to support the team on Oct. 3 as they try to defeat the Lions for the conference title.