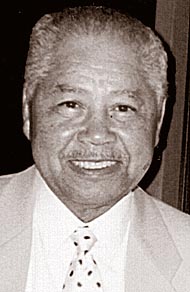 William (Bill) Blocker died Saturday, Sept. 16, at Hospice of Dayton. He was 92.

Bill was born July 14, 1925, in Jacksonville, Fla. He was the only child of William and Sallye Blocker. Bill attended Mary Potter Academy High School in Oxford, N.C. After graduating, he enlisted in the U.S. Navy and served two years in the Aleutian Islands as a signalman second class. After being discharged he attended Howard University in Washington, D.C., where he earned a bachelor of science degree in civil engineering. He went on to complete a master’s degree in engineering management at the University of Dayton. Bill worked at a variety of jobs in the aircraft industry, but the bulk of his career — 28 years — was spent at Wright-Patterson Air Force Base as an aerospace engineer. He was a past member of Optimist International, a lifetime member of Kappa Alpha Psi Fraternity and a 50-year member of First Presbyterian Church of Yellow Springs.

Bill’s passing is mourned, but his life is joyfully celebrated by his wife of 56 years, Connie; his two sons, William and Guy; his two daughters, Hilary Blocker Smith and Bonnie Blocker; and his seven grandchildren.

Memorial services will be held at 1 p.m. on Saturday, Oct. 28,  at the First Presbyterian Church of Yellow Springs. Arrangements are in care of McColaugh Funeral Home Inc. Online condolences may be made to the family at http://www.mccolaughfuneralhome.com.