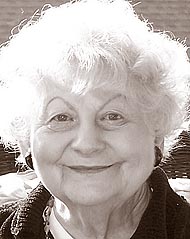 In 1952, she attended the Cincinnati Conservatory of Music and the University of Cincinnati and retired in 1994 after a 30-year career as an elementary music teacher. She was a passionate supporter of arts education and public education. She served as a docent for the Dayton Philharmonic Orchestra in the SPARK (grades K–3) and UPC (grades 4–6) program, preparing a diverse student population to attend concerts and become the audiences of the future. She was a 50-year member of the Xenia Music Club. Through her membership in the International Society of Music Educators, she traveled to education conferences around the world and made friends in England, Korea, Finland, Austria, Holland, India, Nigeria, Malaysia, Japan, Hong Kong and Singapore.

In 2000, Barbara was inducted into the Greene County Women’s Hall of Fame. She was elected on the basis of her contributions to the arts, humanities, politics, education, volunteerism and her multitude of personal achievements. She enjoyed reminiscing about 1940s and ’50s life in downtown Xenia, visiting with fellow alumni from the Class of 1948, sending hand-written cards for birthdays and anniversaries, singing in the Christ Episcopal choir, teaching her piano students and planning Victorian style musicales at the local bed & breakfast.

She is survived by: a sister, Martha (Lewis) Weiner, of San Francisco, Calif.; two daughters, Lisa Ann Stanley (Kevin), of Bartlett, Tenn., and Jennifer Lynne Baer (James V), of New Bern, N.C.; two sons, Jeffrey Lyle Bradfute (Rachelle), of Irmo, S.C. and Jonathan Stiles Bradfute (Robin), of Midland, Mich.; seven grandchildren, Jason Stanley and Jessica Stanley Budde (Troy), James and Hayden Baer, and Elise, Jacob and Jenna Bradfute; three great-grandchildren, Dayton, Kellar and Cohen Budde; six nieces and two nephews, as well as other family and friends near and far too numerous to count. She was preceded in death by her parents and by her brother, Richard B. Block. Barbara will be greatly missed by all who knew and loved her.

Memorial services were held at 11 a.m., Saturday, September 30, at Faith Community United Methodist Church in Xenia, with Father Greg Sammons of Christ Episcopal Church officiating.  Visitation was held from 10 a.m, until service time. Private burial was held in Woodland Cemetery, Xenia, at the convenience of the family. In lieu of flowers, please select your favorite cultural arts organization, church or school music program and give a contribution in her memory. Condolences may be made to the family at http://www.NeeldFuneralHome.com.&nbsp;