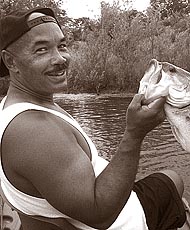 … But for those of us who truly knew Dapper Ted, you’d see he was always dressed to a “T”… From the matching socks and shoes to the coordinating tie, he was sure to catch your eye. Rain, sleet or snow … Ted was always Ready to Go!

Ted met no strangers. His warm and charming personality stood out among all the rest … and oh, that gift of gab, let us not forget.

He was always there to build people up …from bench pressing and cardio, Ted never gave up.
He made all believe that they could reach for the stars … that their goals were obtainable … and they were never too far.

Ted loved to fish and walk in the Glen, whether it be with his grandchildren or next of kin. His love was a bond that could not be broken; although he is gone he will not be forgotten. Services were held on Monday, Nov. 27, at Greater Grace Temple. Arrangements entrusted to Porter-Qualls-Robinson Funeral Home.