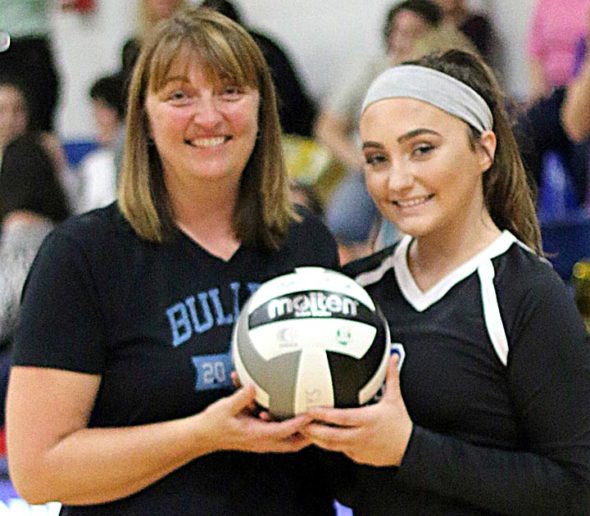 Payden Kegley started out the year with a goal of reaching 1,000 digs to finish her high school volleyball career. Sitting at 612 digs at the beginning of the season, it seemed like an almost impossible task. She would need to average over 20 digs per match to get there. The bigger obstacle for Payden was that she was already playing on the team with the tallest players in the conference, who average over 200 blocks each season. With the addition of freshman Emma Ronnebaum, another almost 6-foot-tall blocker, things were looking a little bleak for Payden. For the first half of the season, Payden was barely averaging 18 digs per game.

Fortunately for Payden (but unfortunately for the team), a change in the lineup put several of the regular blockers out, with the league’s number-one blocker now playing in the setter’s position. Payden took advantage and was more than able to make up for the deficit. When the team played Jefferson on Oct. 10 — with only two games left in the regular season — she was sitting just two digs away from the 1,000 mark. Unfortunately, the Bulldogs were playing a team that wasn’t known for its hitting. All the players were rooting for Payden. After quite a few free balls, Jefferson swung at a ball that was an easy up for Payden. Despite wanting Payden to get her 1,000th dig, the Bulldogs were not going to make it easy for the Broncos to get in a position for a kill.

Finally, midway through the first match, the Broncos were able to pass a ball up to their setter and finally attempt a kill to the deep corner, which Payden was able to dig up with the Bulldogs not only the point but also getting Payden her 1,000th dig. Play was stopped so that Payden could be recognized for the accomplishment and the game ball was given to her. The Bulldogs went on to the win the game in three sets.