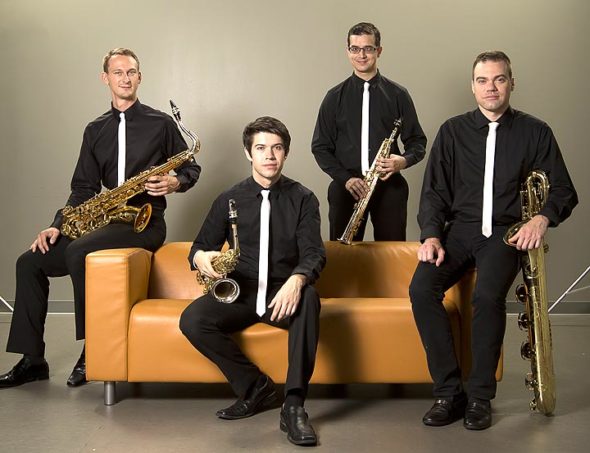 On Sunday, Oct. 29, Chamber Music in Yellow Springs will present the second of this season’s “Quartet of Quartets” with Project Fusion, a young saxophone quartet described by a reviewer in LA Splash Magazine as “a joy to watch, sparkling as much as the instruments in their hands.” The concert will begin at 7:30 p.m. at the First Presbyterian Church.

Formed by four graduates of the Eastman School of Music in 2010, Project Fusion won the gold medal in the Senior Wind Division at the 40th Fischoff Chamber Music Competition in 2013. That same year they became the first saxophone quartet to earn the Grand Prize, as well as the Hugo Vianello Audience Choice Award, at the sixth Plowman International Chamber Music Competition. The group — Dannel Espinoza, soprano saxophone; Matt Amedio, alto saxophone; Michael Sawzin, tenor saxophone; and Matthew Evans, baritone saxophone — is devoted to music education as well as virtuoso performance. Playing entirely from memory, they stand out for “absolutely seamless ensemble work,” according to one reviewer.

Sawzin told a reviewer: “We look for works that will be engaging, lively and animated on stage” — including both standard works and new music. The Oct. 29 program will feature a setting of a Bach chorale and Bartók’s “Six Romanian Dances,” as well as a sophisticated and captivating “Tango Virtuoso,” by French contemporary composer Thierry Escaich; a sinuous, playful “Andante et Scherzo,” by Eugène Bozza; and Mark Mellits’s rhythmic, jazz-influenced “Ex Machina.” Shelley Jagow, professor of music at Wright State University, will give a preconcert lecture starting at 6:45 p.m.

In keeping with its emphasis on education, Project Fusion will follow its Sunday evening performance in Yellow Springs with a visit to WSU’s Saxophone Studio on Monday. Sawzin studied at WSU before going on to earn graduate degrees at Eastman.

Tickets for the concert — $25 for adults, $7 for full-time students with ID — and further information can be found at http://www.cmys.org or by phoning 937-374-8800. “Short season” tickets will also be available for this concert, the Bennewitz String Quartet on Feb. 11, 2018, the Brazilian String Quartet on March 25, and the Annual Competition on April 29 — all for only $80 for adults. Tickets may also be available for purchase at the door. CMYS is grateful to the Ohio Arts Council and the Yellow Springs Community Foundation, as well as to many individual donors, for supporting its mission of presenting high-quality professional chamber music concerts, fostering community interest in chamber music, and enriching the musical life of the community.