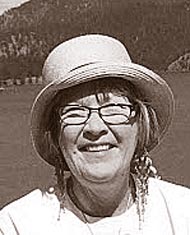 Longtime Yellow Springs resident Terri Ann Thompson, age 56, passed away Nov. 13, after battling a year-long illness. At the time of her death, Terri was a resident of Meadowbrook Rehabilitation Hospital in Gardner, Kansas. Terri was born Dec. 20, 1960, in Sioux Falls, S.D., and spent most of her childhood growing up in Fairborn, Ohio. Terri attended Fairborn Baker High School, and her participation in the Explorer Scout troop and their many excursions were some of her best memories. Terri attended Ohio University and graduated from Wright State University with a degree in Environmental Science.

Terri was proud of her Norwegian heritage, loved lefse and the Minnesota Vikings, enjoyed a good euchre game and never met a stray dog that she didn’t try to adopt. The village of Yellow Springs was her home for many years where she never knew a stranger and opened her home to anyone who needed a place to stay. Terri will be remembered for her infectious laugh and a smile that stretched from ear to ear. Family was very important to Terri, and she will be greatly missed.

Terri was preceded in death by her husband, Walter (Teaspoon) Odum. She is survived by her parents, Warren and Darla Thompson; her sister and brother-in-law, Jim and Tami Jeter; three nieces and three great-nephews. A memorial service will be held on Jan. 27, 2018, at the First Presbyterian Church in Fairborn with internment at Byron Cemetery. Memorial donations in Terri’s honor may be made to YS PetNet, PO Box 21, Yellow Springs, OH 45387.