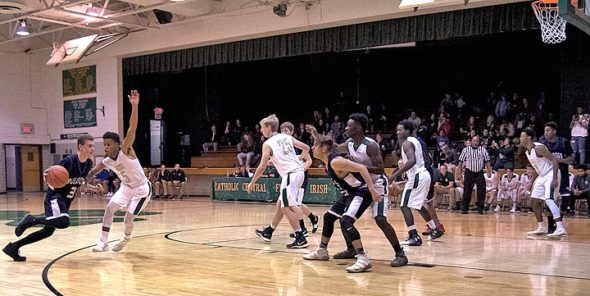 The YSHS swim team had its first meet of the season last Friday, Dec. 8, which was the sprint-style Oakwood Invitational featuring 10 teams at the Dayton Raiders Aquatic Center. Due to early season injury and flu bugs — which also claimed head coach Brad Martin, who was replaced by fellow coaches Margaret Swanson and Franklin Halley — Yellow Springs was the smallest team, with seven swimmers in attendance. However, those who remained had a strong showing.

On the girls team, junior Captain Jude Meekin had a top-10 finish in the 100 backstroke. Junior Sara Zendlovitz also had a top-10 finish in the 100 free. Two freshmen, Natalie Galarza and Madison Werner, competed in their first high school meet. They both also walked away with top-10 finishes (Galarza — 100 individual medley, Werner — 50 breaststroke). Galarza also had very notable races in the 200 medley and free relays, anchoring each one with 50 free splits below 30 seconds.

On the boys side, junior captain David Walker stole the show by winning the 100 individual medley and placing third in the 100 fly. Sophomore Jackson Bleything had a top-10 finish and a personal best in the 100 breaststroke. Junior Harper Mesure had personal bests in 50 butterfly and the 100 free.

Looking ahead, the team will compete in a more traditional high school meet on Sunday, Dec. 17, at the Bethel Invitational at the New Carlisle Sports and Fitness Center at 2 p.m. For this meet, a far greater number of YSHS swimmers are scheduled to attend as they continue to recover.

The boys basketball team completed a 2–1 week on Saturday, Dec. 9, with a loss at Catholic Central. Prior to that, the boys team had faced Greenon and Middletown Christian. Home against the Greenon Knights, the Bulldogs won in a blowout 87–63. The team was led by junior Andrew Clark, who posted 27 points and went an incredible 7 for 12 from behind the three point line. Senior James Browning contributed 17 points and 10 rebounds, and junior Tyrese Benning contributed 16 points and three steals off the bench.

Against Middletown Christian, the Bulldogs pulled out a 74–61 win. Senior Tony Marinelli exploded for 37 points, 29 of which came in the second half. Although the Bulldogs were down seven at halftime, the team drew ahead in the third quarter and never surrendered its advantage. Senior James Browning posted a stat line of 18 points and 11 rebounds alongside fellow forward Trey Anderson, who had 14 points, 10 rebounds and four blocks.

Away at Catholic Central, the boys struggled. At the end of the first half, the team led by one. However, sloppy turnovers and exhaustion got the better of the Bulldogs, and Catholic Central marched to a victory, 69–59. The high scorers for the boys were Tony Marinelli (18 points) and Andrew Clark (17 points).

The girls started out their week away against conference rival Middletown Christian. The Lady Bulldogs cruised to an easy win, 45–14. Gracie Price had 16 points and Amani Wagner had 12 rebounds as the girls moved to 2–0 in the conference.

The Lady Bulldogs then had a rough home loss to Ansonia, 43–53. Wagner barely missed the statistical feat of 20 points and 20 rebounds, posting 23 points and 19 rebounds. Gracie Price had 14 points.

The Bulldogs then played away at Legacy Christian and fell to 2–1 in the conference, as they were defeated 62–14.