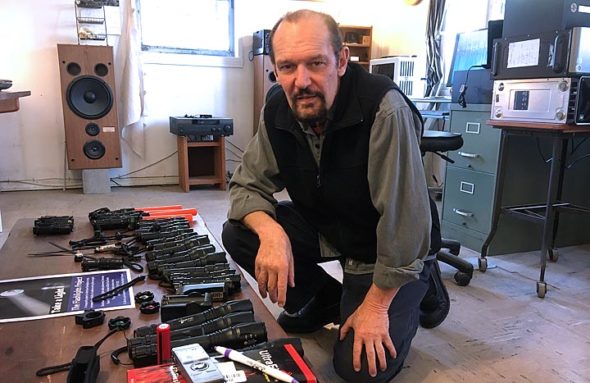 Villager Carlos Landaburu has launched the Flashlight Project, in an effort to make sure that local residents have the light they need when they’re out at night. He sells the lights for $5 (small) and $12 (large), and kids get the lights for free. All proceeds go back into the project. (Photo by Jeff Simons)

He’s making light of the darkness

In an article published in The Guardian in November 2016, Nick Dunn advocated walking at night as a way “to experience, in a powerful and visceral way, a much broader world than that which exists in the daytime.”

Good advice, indeed. But there’s also an element of risk.

According to the Center for Disease Control and Prevention, in 2015 more than 5,000 pedestrians were killed in traffic accidents in the United States. And about a quarter of those accidents occurred at night.

To reduce the risk of injury or death, the CDC advises pedestrians to increase their visibility at night by wearing reflective clothing and carrying a flashlight.

This year, Yellow Springs resident Carlos Landaburu took it upon himself to promote pedestrian safety in the village by creating the Flashlight Project, a nonprofit program that distributes flashlights to increase the visibility of walkers, runners and cyclists at night.

“In the past I did a lot of running at night, and I always wore a reflective vest to be more visible,” Landaburu said. “But I also walked at night, and I never wore a vest because it was kind of clumsy.” He also tried reflective clothing, but he was never consistent with that practice. In due course he began carrying a small flashlight and quickly realized that it was something he could do on a regular basis.

“Although there have not been any recent fatalities, a few years ago a villager was clipped by a side view mirror while walking at night,” he said.

Carlson advises villagers to use lights on their bikes and for pedestrians to carry a flashlight or a blinking light.

In recent years, technology has greatly improved the quality and efficiency of compact flashlights.

“Now they are very bright, relatively inexpensive, and based on LED technology,” Landaburu said. LED, or light emitting diode, flashlights provide lower energy consumption and thousands of more hours of uninterrupted use than standard incandescent ones.

“I always make a point of having one with me when I walk at night,” he said.

For the most part, Landaburu sells and distributes UltraFire flashlights, which are manufactured and donated to his project by a company based in Shenzhen, China.

Landaburu’s most compact and affordable model is a palm-size unit, powered by a rechargeable battery. It can project up to 1,200 lumens — approximately 18 watts — of light. That’s a whole lot of illumination: the kind that would suffice for caving or search and rescue missions.

Police Chief Carlson cautions villagers to keep their flashlights pointed down when walking at night.

“The new LED lights can blind a motorist. So the best way to use a flashlight is to have it in your hand, moving back and forth, in a natural motion, along the ground.”

Landaburu, who’s lived in Yellow Springs since 1987, grew up in Argentina, where he earned a Ph.D. in ecology from the University of Buenos Aires. Shortly afterwards, he lived and worked in Holland and then moved to the U.S. After completing a master’s degree program in regional planning from Ohio State University, he worked as an environmental scientist for the Ohio EPA and then for a consulting firm in Dayton. In the late 1990s he worked for the Miami Valley Conservancy.

“The job was part environmental and part computer support,” he said. “Eventually, the computer part of the job developed and eventually took over. So I ended up being the IT manager there for a number of years.”

In 2002, Landaburu started his own business, and for the past 15 years he’s been providing computer support for individuals and small businesses.

His son, Luciano, grew up in town and now lives in New York where he works as a computer specialist for the ACLU.

In 2016, Landaburu used Facebook to solicit feedback about his flashlight project.

“I got a lot of positive responses, and sensed that there was a lot of fertile ground out there,” he said.

In June of 2017, he spent about $600 out of pocket to buy flashlights and began giving them away, mainly to children and young people.

This past summer, he set up a table at the farmers market on Saturdays to promote his project.

“The response was very encouraging,” he said. “Kids would get the flashlights for free and adults would buy them. I got a lot of good feedback from the community.”

In the fall, after securing a permit from the village, he set up a table with an array of flashlights on Xenia Avenue in front of Dark Star.

Eventually, Landaburu realized he couldn’t continue funding his project out of pocket. He contacted Greene Giving, the Greene County Community Foundation, and they seemed willing to support his project. But in order to receive funding, he first needed to submit specific cost estimates to the foundation from venders like Amazon.

“But that was easier said than done,” he said. “Venders are reluctant to give quotes for large purchases. And that’s because these companies like to sell direct.”

As a last resort, Landaburu asked for a donation directly from UltraFire. He explained the project, and that it was in a small town, in a local market, and mostly for kids. After several email exchanges the company agreed to donate flashlights, along with batteries and chargers. Over the past few months Landaburu has received more than 150 flashlights and accessories from UltraFire. And while he charges adults for the flashlights, he puts all proceeds back into the project, and does not make any profit.

He expects the relationship with UltraFire to continue indefinitely.

“It was a lucky thing for me and the community that I ran into these people,” he said. “They have a very good product and they’re relying on me to help promote it.”