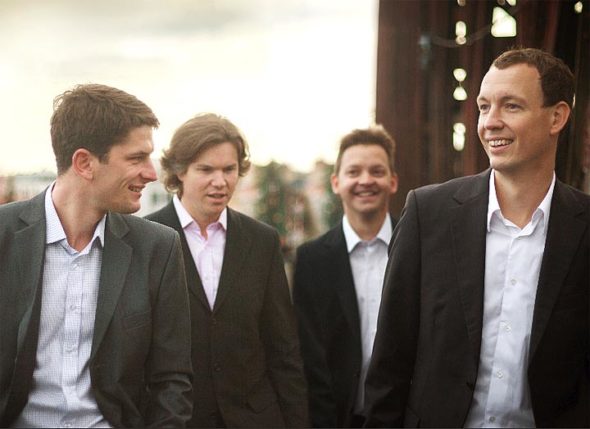 On Sunday, Feb. 11, Chamber Music in Yellow Springs will present the outstanding Bennewitz String Quartet, a Czech group acclaimed for “great art,” “clarity of structure … beautiful tonal palette and purity of intonation” (Frankfurter Allgemeine Zeitung). The concert will take place at 7:30 p.m. at the First Presbyterian Church. WSU Professor Emeritus Chuck Larkowski will give a preconcert lecture at 6:45 p.m.

The Bennewitz Quartet especially enjoys playing and performing on the Czech domestic music scene, for example, with the Czech Philharmonic Orchestra. In keeping with its mission to actively promote Czech music, the quartet has chosen for its Feb. 11 concert Leoš Janác˘ek’s Quartet No. 2, “Intimate Letters;” Bedr˘ich Smetana’s Quartet No. 1 in E minor, “From My Life;” and Antonin Dvor˘ák’s Quartet in G major, Op. 106, bringing to its American audience “a big program offering the very best of Czech string quartet repertoire featuring three most important composers for our music tradition.”

The Bennewitz Quartet’s recordings have received rave reviews. Its recording on the Coviello Classics label of Janác˘ek’s two string quartets and Béla Bartók’s fourth garnered praise for its “fiery temperament” (Fono Forum); the website Klassik.com described as “simply phenomenal” its recording of both of Smetana’s quartets. Its 2015 release of Dvor˘ák’s quartets Op. 51 and Op. 106, under the SWR Music/Naxos label, became the choice of Harmonie magazine and the editor’s choice.

Tickets for the concert — $25 for adults, $7 for full-time students with ID — and further information can be found at http://www.cmys.org or by calling 937-374-8800. Tickets may also be available for purchase at the door. Future CMYS concerts in the current season include the Brazilian String Quartet on March 25 and the Annual Competition for Emerging Professional Ensembles on April 29. CMYS is grateful for grant support from the Ohio Arts Council and the Yellow Springs Community Foundation, helping to bring fine chamber music to area audiences.