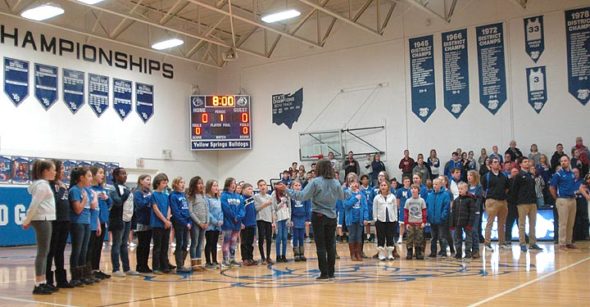 On Friday night, Jan. 19, the YSHS JV and Varsity boys basketball teams hosted Middletown Christian Eagles. Both teams lost to their rivals: JV, 40–30, varsity, 72–52. A bright spot between the games was the singing of the national anthem by the Mills Lawn School fifth and sixth Grade choir, directed by music teacher Jo Frannye Reichert. (Photo by Matt Minde) 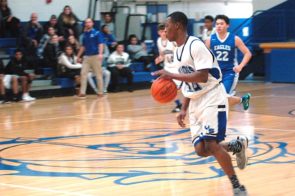 Boys basketball
The Bulldogs were on the wrong side of the weather two weeks ago with games against Jefferson being canceled for boys and girls. The boys have played three games since the last sports section and unfortunately have lost all three. On Jan. 9, they lost a tough one to Dayton Christian, 62–60. They followed that up with a loss to Middletown Christian, 72–52. Finally the Bulldogs lost in a rough game to Ponitz, 106–69. They play Friday at Miami Valley.

Girls basketball
The Lady Bulldogs also played three games over the last two weeks with a win and two losses. Against Graham the girls gave up 25 first-quarter points and lost 73–44. Amani Wagner had 14 rebounds in the losing effort. The girls then played at home against Middletown Christian on Thursday, Jan. 18. The win was punctuated by a third quarter in which the Lady Bulldogs defense did not let the opponent score. Gracie Price scored 13 points off the bench and Amani Wagner had 11 points to lead the girls. The score was 56–23. The last game of the week, on Monday, Jan. 22, was played at home against Legacy Christian and the girls lost 67–33. Gracie Price was once again the leading scorer with 18 points and Dede Cheatom had 10 rebounds.