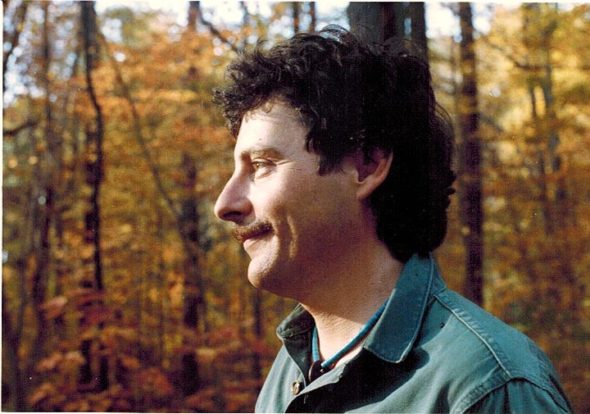 Robert William Thompson of Washington Court House and Yellow Springs died on Dec. 23, 2017, at Patriot Ridge Community, Fairborn, at the age of 71. Bob was born in Columbus, Ohio, on Dec. 4, 1946, to Rebecca R. Thompson, a school teacher, and William K. Thompson, a farmer, harness maker and breeder of Belgian horses, of Fayette County, Ohio. Both preceded him in death. He is survived by his partner of 32 years, Marcia Wallgren, and brother Michael (Ruthann) Thompson, two nieces and two nephews.

Bob grew up on the family farm in Washington Court House. He loved solitude in nature and later designed and built an earth-sheltered passive solar home overlooking Paint Creek there. As a child he became an avid hunter of arrowheads and a prodigy drummer. As a teenager he toured the U.S. and Europe with his popular rock band “The Cavaliers” and earned the nickname: “Bob the Beat.” He graduated from Miami Trace High School and attended Wilmington College and The Art Academy of Cincinnati. He was a gifted visual artist and a world-class professional drummer and percussionist. Bob played, toured and recorded with many fine musicians across the U.S., including Pharaoh Sanders, Lefty Dizz, Scott Cossu and Dave Valentin. His career included a landmark recording with Doug Snyder, “Daily Dance”, and he was a member of Warren James’s “Noh Age Jazz Band” in Yellow Springs, Mad River Theatre Works in West Liberty,  “Snapper Mitchum’s Blues Invaders” and Michael Bashaw’s bands “The Bridge,” “Puzzle of Light” and “Theatre of Sound” in Dayton.

With Mad River Theatre Works, under a grant from the National Endowment for the Arts, he helped create music for original theater and performed across the country in theaters and schools, the Kennedy Center in Washington, D.C., and the Vancouver International Children’s Festival in British Columbia. With Michael Bashaw he helped create music for dancers with Rhythm & Shoes and The Dayton Contemporary Dance Company, for the Dayton Philharmonic Orchestra and Sarajevo Philharmonic Orchestra, and concerts and recordings including “Sound Sculpture Music For Falling Water,” a CD and fundraising performance composed and performed at Frank Lloyd Wright’s masterpiece to help raise money for needed repairs. He played for the Dayton Peace Accords, the grand opening of Dayton’s Schuster Performing Art Center, and worked with Muse Machine, educating children in schools across Ohio.

Bob was a wonderful steward of the land and planted many trees, and worked to prevent the channelization of Paint Creek with conservationist Ralph Ramey. He was loving, kind and gentle with the people and animals in his life. He liked to travel and enjoyed visiting ancient ruins in the Southwest, and earthworks in Ohio and other states, and riding his BMW motorcycle. He was a lifelong student of world music and world religions, archaeology, paleontology and natural history. Bob’s creative spirit, playful humor, and acute sense of wonder persisted as he continued to make art and music during the early onset Alzheimer’s disease he survived for over a decade. He was a long-time member of the Archaeological Society of Ohio, and a supporter of The Archaeological Conservancy, The Sierra Club, Amnesty International and World Wildlife Fund. Gifts can be made to those or the Alzheimer’s Association in his memory. A celebration of his life will occur in the future. Arrangements in care of Belton-Stroup Funeral Home.