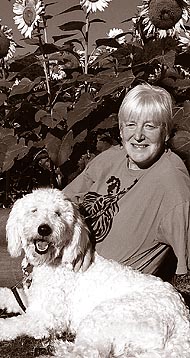 Susanne Emily Oldham took her leave of family and friends on the first day of 2018. Throughout her life Susanne brought creativity, energy and her unique perspective to every endeavor. She will be missed by her family and all who knew her.

Susanne was born in Greenfield, Ohio, in 1951. After growing up in Yellow Springs,  she pursued flute studies in London, England, with Richard Adeney, principal flutist with the London Philharmonic, receiving an associate diploma from the Royal College of Music, London, England, in 1973. She subsequently was awarded the Bachelor of Music degree from the College-Conservatory of Music in Cincinnati in 1974, where she studied flute with Jack Wellbaum, solo piccolo with the Cincinnati Symphony — with which she played as an undergraduate — and Master of Music from Colorado State University, Fort Collins, Colo., in 1975.

As an arts administrator she went on to a wide variety of professional endeavors, including work with the New Jersey State Council on the Arts; Middlesex County Cultural and Heritage Commission; Rutgers (N.J.) Concert Bureau; and Amberson Enterprises (Leonard Bernstein’s management company). For 10 years she was the coordinator of music programs at the Folger Shakespeare Library in Washington D.C., where she was manager of the early music ensemble The Folger Consort. She also managed the National Repertory Orchestra in Evergreen, Colo. Later in life than many — at age 50 — she embarked on an amazing adventure as a Peace Corps volunteer. She trained in Zimbabwe and did her service in Lesotho. Her love for Africa continued with many travels there, including a solo trip to Ethiopia last year. Her international travel included a year spent in England, another in Marseille.

After moving back to Yellow Springs to be near family, she and John Semmlow renovated the Arthur Morgan House into a beautiful bed and breakfast, which she successfully operated for 10 years. She was a member of the Yellow Springs Chamber of Commerce, contributing to and participating in many community activities.

Susanne had many wide-ranging interests. She sailed the world with John, often in the company of family and friends. She loved dogs, and taught her faithful companions many tricks, some naughtier than others. She was the proud owner of Steele, whom she trained to get his therapy dog credentials. Her artistic tastes ranged from African art, which she collected and displayed at the Arthur Morgan House Bed & Breakfast, to magnificent landscapes, to contemporary art and architecture, and she visited galleries and museums across the world, sharing images with her Facebook friends as she went. Her love of folk dancing, which began in Yellow Springs, continued during her time in Chicago, New Jersey and Washington DC. Her musical talent was offered up in a variety of ways, whether as a participant in such diverse groups as I Solisti di Zirnachron, a folk dance band; the New Brunswick Chamber Orchestra; the Yellow Springs Chamber Orchestra and Community Chorus; and the women’s a cappella group Sokolitse, also joining family and friends with flute or voice for caroling and other impromptu events.

She was well known to her admirers as a formidable organizer and problem solver, always willing to step in when she perceived a need. Her culinary skills were appreciated by all, whether through the gourmet Arthur Morgan House breakfasts, her legendary French-inspired gravy, or her cranberry chutney, spirited across international borders to the delight of many.

A memorial service will be held on Sunday, Feb. 18, 2018, at 2 p.m. in the afternoon at the First Presbyterian Church in Yellow Springs.

Donations in lieu of flowers may be directed to Community Music, care of the Yellow Springs Arts Council.

One Response to “Susanne Emily Oldham”