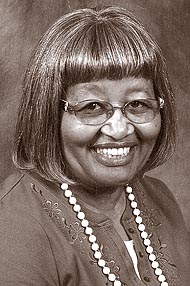 Mrs. Anna Clara Gee Blackwell-Hagans went home to be with her Lord and Savior on Wednesday, Jan. 31,  in the presence of her loving husband Oliver Hagans, daughter Valerie Ann Blackwell-Truitt and grandson Kyle Matthew Truitt. Anna died peacefully at home in Springfield, Ohio.

Anna was born in Springfield in 1928, a daughter of Barrett (Buck) Gee and Letha Cowans Gee. Anna graduated from Springfield High School at the age of 16 and took courses at Wilberforce University. She met, fell in love with and married her late husband, Harold Benson (Jerry) Blackwell Sr., to whom she was happily married for 59 years. Anna and Harold had six children — Harold, Jr., Barrett, Nisa, Valerie, Cynthia and Michael. She was an incredibly loving, patient, kind, generous, empathetic mother. She taught her children many life lessons and how to treat others, and she led by example. She instilled the value of helping those less fortunate, the value of independence, asking for help from others, the value of education and the value of self worth, standing tall and proud and advocating for oneself and for others.

Anna was blessed with the gift of music. She began playing piano at the very tender age of 5. Her music career was greatly influenced by her father Barrett (Buck) Gee, a tap dancer and teacher, and her mother Letha Cowans Gee, who would sing to her. As a result of their nurturing and encouragement, Anna flourished. Her piano teacher, Ms. Madge Grandson, traveled to Springfield from Dayton every week by bus during the Great Depression to give her lessons at the cost of $.25. Her father, Buck Gee, wanted her to learn to play various styles of music. He would have his friends, who were local artists, come to their home and teach Anna. At the age of 16 she was encouraged by Mrs. Edith Worley of Springfield to memorize music, playing the 31-page George Gershwin’s “Rhapsody In Blue”. Anna was in her father’s tap dance troupe “The Gees” as a young teen along with her sister, the late Beulah Stevenson, her brothers, the late William Gee, Barrett and Robert Gee and her cousin, Lebron Hale. Anna and her sister Beulah performed together on a radio show as young women and in other venues singing duets.

Anna was the accompanist for the Wright State University Chamber Singers in the Department of Music. She performed numerous solo concerts during her career and performed with her daughters in operas, talent shows, weddings, church programs, community dance concerts, community programs and the like. Anna taught dance, voice, organ and piano to thousands of young people over the past 51 years in her homes in Yellow Springs and Springfield, retiring in October 2016.  She was also instrumental in providing children opportunities to participate in the Springfield Youth Orchestra. She held annual concerts for her students, providing them with a venue to perform.

Anna was a philanthropist as well. During her 51 years of teaching, she provided yearly scholarships to students who were unable to afford lessons. Her kindness and generosity enabled many students and their parents the opportunity to learn piano and the study of music. This was her way of giving back to her communities and helping children. In Anna’s 51 years of teaching, she taught several generations of students from the same families including her own. She had the pleasure of teaching her five children and three of her grandsons; Adam, Justin and Kyle.

Anna was a concert pianist, soprano, composer, organist, author, teacher, choir director and accompanist, as well as a recording artist. She was an adjudicator for the National Guild of Piano Teachers and a former member of the American College of Musicians. She is the author of the books “Twenty-Three Days of Music in Europe” (1977) and “He’s All I Need: My Life Story!” (2013). Her CDs include “Oh Give Thanks” (2003) and “He’s All I Need” (2013). She is the recipient of many honors and awards, and is listed in several national and international publications including “The World’s Who’s Who of Women,” “Continental Who’s Who,” “Who’s Who in Music,” “Biographical International,” “Who’s Who of American Women” and “National Association of Professional Women.” She was a member of numerous organizations over the years including the American College of Musicians, National Council of Negro Women, The Frontiers, The Wilberforce Chapter of the Links, The Retirement Set and Historically Disadvantaged Businesses Minority and Female Owned Business, to name a few.

Anna was baptized at St. John Missionary Baptist Church in 1942 and began playing piano for the Senior Choir in 1943 at the age of 13. She played a total of 74 years for church choirs (St. John, Central Chapel AME of Yellow Springs, and Mt. Zion). She held several positions during her career as Minister of Music and Director of the Male Chorus. In 1969 she produced an album titled St. John Sings with all of the church choirs on the album. In 2013 Anna invited her St. John Family to sing on her CD “He’s All I Need.” As  composer, one of her children’s favorite compositions was “Boogie Woogie Breakdown.” They asked her to play it over and over again throughout their lives and she was more than happy to comply. Her composition “Let Everything Praise The Lord” was performed on her first CD as a trio. The St. John Choirs performed this work under her direction several years later.

Mrs. Anna Blackwell-Hagans held a degree in Business Management from Park University, Parkville, Mo., which she earned in 1984. At the age of 60 she went back to school to earn her Nursing Degree as an LPN from Clark State Technical College, Springfield, Ohio.  Anna received her master’s degree in music performance (piano) in 2005 from Wright State University, Dayton, Ohio, at the age of 76. For her thesis, from memory, she played a 65-page composition by Russian composer Dmitry Kabelevsky. In 2011 Anna returned to higher education one last time to earn her Master of Education in special education from Grand Canyon University, Phoenix, Ariz., at the age of 82. She said God’s spirit spoke to her, telling her to teach children. She knew there was more God wanted her to do. She felt it was her obligation to do as much as she could for children.

In 2015, Anna married Oliver Wendell Hagans Sr. of Springfield, Ohio. They lived happily together for almost three years. Oliver was a loving, devoted and kind husband and great companion to Anna during the last three years of her life.

Anna felt honored and humbled that God had blessed her through several serious health issues, and was grateful for the love of God, the love of her family and her St. John Missionary Baptist Church family.

Mom, your beautiful shining light will live on in your children, grandchildren, great-grandchildren and all whom you have touched in your wonderful life. We will miss you deeply.

Visiatation will be held on Friday, Feb. 9, 2018. at St. John Missionary Baptist Church, located at 34 W. Mulberry St. Springfield, 5:30–8:30 p.m. Funeral will follow on Saturday with visitation at 11 a.m. until time of service, which will be at noon with Pastor Ernest Brown officiating. Interment will follow at Ferncliff Cemetery. Arrangements entrusted to Porter-Qualls-Robinson Funeral Home.