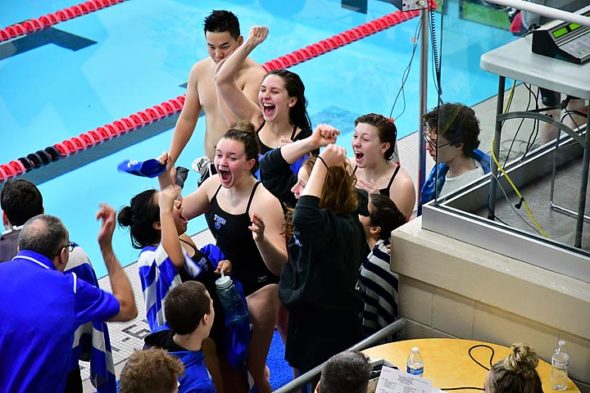 The Yellow Springs High School girls swim team won the Metro Buckeye Conference championship for the third year in a row on Saturday, Feb. 3. Shown above celebrating are Coach Franklin Halley (lower left) and team members Sara Zendlovitz, Madison Werner, Eden Spriggs, Natalie Galarza, Jude Meekin, Aza Hurwitz and Ellery Bledsoe.
In a statement this week, YSHS Athletic Director Nate Baker wrote, “We want to extend a huge congratulations to the YS swim team as they earned the 2018 Metro Buckeye Conference title! This caps off a 3-peat as they now have been the conference champs 3 years in a row — what an amazing accomplishment! This team and coaching staff has shown a drive and commitment level that we strive for across the board for our teams.”
The girls will swim this Friday, Feb. 16, at the districts meet at Miami University. (Submitted photo by Kathleen Galarza)

The YSHS girls swim team kept the tradition alive of bringing a group to districts once again this year.  The team had a very strong showing at the Mason Sectional Meet on Saturday, Feb. 10, when all swimmers once again scored points either individually or in relays.

The team was led by Captain Eden Spriggs, who finished in fourth and fifth place respectively in the 200 free and 100 fly. Both those finishes earned invitations to compete at the district level, which required being in the top 32 from all of the sectional meets. Both times were personal bests. Spriggs will appear for the third year in a row at districts. 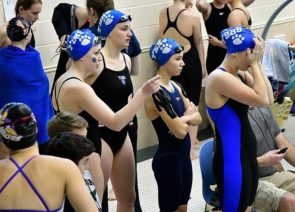 The 400-free relay consisting of Spriggs, Captain Jude Meekin, senior Aza Hurwitz, and freshman Natalie Galarza also bested the team’s conference record time set last week to also secure a spot in the district meet, which is one step below the state meet. This will be Meekin’s second districts appearance, while Hurwitz and Galarza will be making their districts debut.

The boys team finished their season at the Centerville sectional meet Friday night.  Captain David Walker led the way with an impressive eighth-place finish in the 100 free along with a personal record in his 12th place 200 IM.  Sophomore Mason Lindsey and Junior Harper Mesure notched lifetime bests in the 100 free as well. The 200-free relay consisting of Sophomore Jackson Bleything, Lindsey, Mesure and Walker improved by three seconds to come in 12th overall.

The girls Division II district meet will be at Miami University in Oxford on Friday, Feb. 16. The competition will begin at 5:45 p.m.

The boys began their week with a loss against Emmanuel Christian, 53–36. Despite a good effort from three-point land (7–18, 39 percent), the boys struggled to score in this matchup. James Browning scored 18 points on 50 percent shooting and a game-high five steals to go along with 8 rebounds. Trey Anderson had 10 points. The Bulldogs were unfortunately without star guard Andrew Clark, who is suspended for two games due to technical foul accumulation. Christian Elam had six assists.

The boys then played their second game of the week away at Dayton Christian, once again losing. James Browning continued his hot streak leading the team with 21 points and 12 rebounds. Tony Marinelli contributed 14 points. The team lost by 11, 55–66.

They play next at Jefferson Township on Friday, Feb. 16.

The girls lost their final game of the regular season to Dayton Christian, 26–50. They play next at Fayetteville Perry in a playoff game on Saturday, Feb. 17.