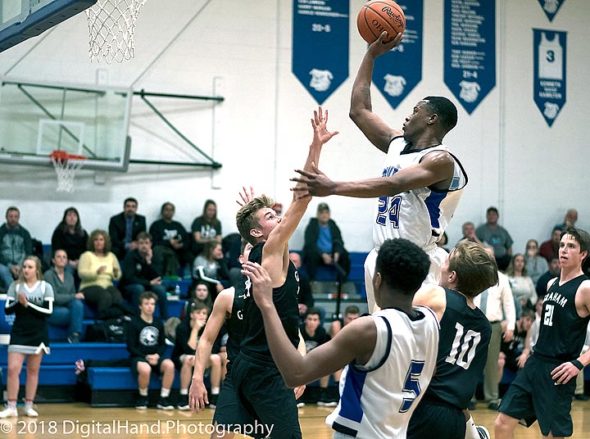 Senior James Browning, #24, took a shot during the Feb. 13 game against Graham High School, which the ’dogs won 70–67 in a fourth quarter comeback. Browning was among the senior basketball players and cheerleaders honored at Senior Night. (Submitted photo by Ilyaas Harris, Digital Hand Photography)

Spriggs started things off by capturing 28th in the 100 butterfly, swimming a 1:05.69. Then, she, along with Meekin, Hurwitz and Galarza, stunned many in attendance by improving by nearly 11 seconds from the previous week to take 19th overall while being projected to take 22nd. Spriggs broke the one-minute barrier in the event for the first time in her life, swimming a 59.87. Hurwitz dropped a shocking six seconds while Meekin and Galarza both also swam personal best splits. Their time of 4:08.86 is likely second only to the school record of 4:03.18, which was set in 1998 by Laura Allen, Jonina Hernandez, Anna Lurie and Mada Zopf. With three of the relay participants set to return next year, the record will be squarely in the team’s sights moving forward. While no swimmers advanced to state, the good showing provides hope that the team will make it in the future.

The Metro Buckeye Conference Champions will be recognized on Monday, Feb. 26, at 7 p.m. in the YSHS Gymnasium for their Winter Sports Night.

With a season record of 15 wins and 3 losses, the No. 2 tournament seed, McKinney eighth-grade boys basketball team, won the 2017–2018 Metro Buckeye Conference Championship against undefeated No. 1 seed, Dayton Christian, on Saturday, February 17. It was a thrilling one-point overtime win, 39–38.

Eighth-grade coach Steven Harshaw stated: “They gave 150 percent all season! They earned the title by first beating No. 3 seed, Troy Christian, and then No. 1 seed, Dayton Christian, who beat them twice during the regular season. By the way, those were the only two conference losses for the season with one nonconference loss. Each game was hard fought. They persevered and deserve the championship! Many thanks to seventh-grade coach Matt Wallace, as well as parents and the community for their support throughout the season.”

The YSHS Bulldogs had a good week playing in two games and winning both.  The first win came against Graham by virtue of an incredible fourth quarter comeback. Down 47–56 entering the fourth quarter, the boys squad scored 23 and gave up only 11 to eke out a victory 70–67.

At home for their Senior Night, the boys had quite a few seniors to honor prior to the game against Jefferson Township. Seniors Tony Marinelli, James Browning, Elias Harris, Christian Elam, Fisher Lewis and Donnie Isenbarger were all celebrated before the game. Along with them, longtime manager Stewart Miller announced his retirement. Miller has given 38 years of volunteer work to the boys basketball team and has been a crucial part of the team for many seasons. Athletic Director Nate Baker presented him with an engraved plaque in a pregame ceremony.

The boys final home game had a large turnout and things got off to an exciting start. A high-scoring first quarter saw the Bulldogs’ Tony Marinelli pick up a technical foul and head to the bench. It was all Donnie Isenbarger early as he scored nine first-quarter points to lead the team. In the second quarter, Jefferson stifled the Bulldogs’ offense, and a number of sloppy turnovers allowed Jefferson to jump out to a 34–22 lead at the half. After the break, however, it was all Yellow Springs. In the third quarter, the boys managed to cut three points off the Jefferson lead, helped in large part by Fisher Lewis’ two third-quarter blocks. However, this quarter also saw Marinelli return to the court and receive a second technical, leading to his ejection and subsequent two-game suspension.

Entering the fourth quarter, the Broncos still led by nine, 46–37. However, Andrew Clark took over in the fourth. At the end of regular time, the score was 51–51. The boys had tied it to head to overtime. In the five-minute overtime period, the Bulldogs outscored the Broncos, 8–4. Fisher Lewis hit a mid-range jumper in the clutch and Andrew Clark continued his dominance from the fourth quarter as the Bulldogs pulled out the win, 59–55. Fisher Lewis led the team with three blocks, James Browning posted a double-double of 11 points and 10 rebounds, Donnie Isenbarger scored 14, and Christian Elam had 4 steals. Not to be outdone by the seniors, Andrew Clark scored 19 points to lead all scorers.

The cheer squad said goodbye to their seniors on Friday, in an emotional ceremony before the boys basketball game. Seniors Ket White, Kelsie Lemons, Raven James, Payden Kegley, Brielle Willis and Ellyson Kumbusky were honored. Their school spirit and talents will be missed.

Senior Jonah Trilliana walked before the boys basketball game Friday night in celebration of a two-season-long career. Having been one of the first to join the program, he will be missed by the team.