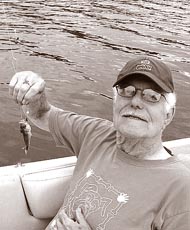 Walter (Wally) Sikes passed away peacefully at Hospice of Dayton on Feb. 28, 2018. He was born June 20, 1925, in Gallatin, Tenn. to Walter and Ellafrank Sikes. He was a graduate of Oberlin College where he was captain of the first varsity lacrosse team. He earned master’s and Ph.D. degrees from Purdue University. During World War II, he served for three years in the Merchant Marines as a deck hand and deck officer on cargo ships, tankers and troop transports in the Atlantic, Mediterranean and Pacific war theaters.

Wally married Evelyn Hisey, whom he met on a blind date at Oberlin College. They married in 1947 after Evelyn graduated. He had two more years to complete his degree due to interruption from the war. They joined thousands of other young people in this country as a veteran student married couple.

In 1949, after graduating from Oberlin, Wally and Evelyn moved to Yellow Springs, where Wally had a position on the faculty at Antioch College in the cooperative education department. In 1953, Wally took the job of personnel director of Morris Bean and Company.

After receiving his Ph.D. from Purdue, Wally was the director of the work-study program at Kalamazoo College. The family then moved back to Yellow Springs where Wally worked as dean of students at Antioch College.

In 1965 Wally did post-doctoral training in group dynamics, organizational development and personal growth at National Training Laboratories (NTL) Institute in Bethel, Maine. That was a transformative experience and key to his professional development.

Subsequently he was director of programs in higher education at NTL in Washington, D.C. He taught organization behavior and group process at a number of institutions, including Antioch University, American University, George Washington University and Wright State University. He was the principal researcher on a five-year project funded by National Institutes of Mental Health called Training Teams for Campus Change that focused on the use of groups as change agents.

Wally coauthored “Renewing Higher Education from Within,” published by Jossey Bass, and edited “The Emerging Practice of Organizational Development.” He wrote a number of articles about groups, personal development and organizations. His professional focus was always on helping organizations and individuals to more effectively and humanely reach their potential. For 25 years he had a successful consulting practice in which he worked with a wide range of nonprofit and for profit organizations in this country and abroad

Wally was devoted to Yellow Springs, especially the public schools and Antioch College. He was gratified to have been involved with Antioch’s resurgence. He was also particularly proud to have been a key initiator and manager of the Yellow Springs Endowment for Education and the Village Mediation Program. He served on a number of other boards, including YS Home, Inc. and the Mills Lawn After School Program. He was involved in many YS school levies over the years. He and Evelyn were members of a YS club called CASH that started out as an investment club in the early 1950s and evolved into a group of friends who met monthly for social (and educational) purposes. He may have been a record holder for the number of letters to the editor written to the YS News.

Wally enjoyed family get-togethers. He took the whole family on cross-country trips, the Virgin Islands, Disney World and Hawaii. He travelled extensively, abroad and in the US, with family and friends, i.e. Ruth and Tony Bent. Tony and Wally began their friendship as young boys in Berea, Ky.

Every summer Wally and Evelyn spent a few weeks at their family cottage on Crystal Lake in Michigan, where they were joined by an assortment of friends, children, grandchildren and great-grandchildren, nieces and nephews — he was known as “Uncle Dub” to his sister’s children, Ann, Bo and Susie. Wally spent many hours in his boat teaching everyone to waterski, fish, and was constantly fixing the boat with friends He also loved arranging large beach picnics and sailing.

An event in his life that he did not talk about much, but that he was very proud of, was saving a young, drowning woman, at great risk to himself, from the surf in Puerto Rico when he was already middle-aged. He felt that by meeting that challenge  he had passed an important benchmark of his humanity and courage.

Wally and Evelyn had a loving relationship. They celebrated their 70th anniversary on June 19, 2017. He voiced that he particularly enjoyed Evelyn’s frequent chuckle, her unwavering optimism and her consistent focus on others’ needs. Evelyn, as well as his family and friends loved Wally’s storytelling, wit, contagious laughter, amazing memory and passionate loyalty to family. He was a devoted and supportive father to his three daughters; always willing to help out when help was needed.

Wally and Evelyn provided a temporary home for many young people over the years, including Melodee Hillman Thomas, who is considered a fourth daughter.

He also leaves behind many loving nieces and nephews and his sister-in-law, Esther Gressard. Thanks to the many family friends who came to visit and support Wally in his final days, especially Melodee Hillman Thomas, Belinda Newsome Ramsey, Kim Rohmann, Eliza Woodburn, Carol Young, Jennifer Berman and Joseph and Eliza Minde-Berman, and Hollyn Bermond.

Evelyn would like to give a special thanks to all of the wonderful caregivers, especially Amy Ray and Hospice of Dayton, who allowed Wally to stay at home until his very last days. She and Wally loved and appreciated them with all of their heart.

Donations may be made in Wally’s name to YS Endowment for Education or YS Schools. A memorial service will be held in April. Further details to be published in a future issue of the YS News.

One Response to “Walter ‘Wally’ Sikes”