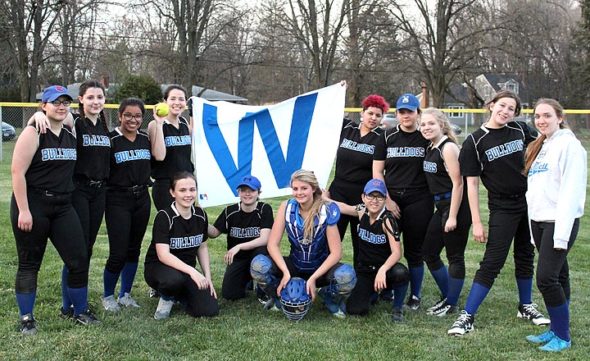 It was a night of firsts for the Yellow Springs girls softball team this past Friday night, April 13, as they earned a hard-fought 20–17 win against Thurgood Marshall. It was the Bulldogs’ first home game of the season, and their first win of the year.

Another first: When senior Brielle Willis was called into the game to protect a late lead on the pitching mound for the first time in her career, she responded by striking out three batters in one-and-two-thirds innings to preserve the victory for the Bulldogs and earn her first save.

Credit goes to pitching Coach Jesi Worsham for the debut by Willis; the team needed to pull its starter, but there was no way I was going to use Willis for the first time ever in a high-pressure situation like that, and when Coach Jesi told me to put Willis in, I said “No.” But Coach Jesi kept insisting she was ready to pitch, so she finally convinced me it was the right move — I’m glad I listened to my pitching coach.

In the second inning, the Bulldog offense gave the team a lead it never relinquished when they scored 16 runs after two outs. The Bulldogs sent 20 players to the plate that inning. Gracie Price had a double and a home run in the inning and Kadie Lafferty, Elly Kumbusky, Brielle Willis and Beca Spencer all had two hits in the inning and seven players scored two runs that inning. I’ve coached high school softball for 13 years — I’ve never seen a bigger two-out rally for this many runs.

The Bulldogs defense also played a key part in their victory. Clutch play of the evening was an unassisted double play by senior second-baseman Elly Kumbusky in the last inning. She’s a four-year starter at second base, and has used her quickness for four years now — and always seems to make the play when it’s needed the most.

Also key to the win was the outstanding play of catcher Ashlyne Griffis, who was playing the second game of her career at catcher. She showed off her rocket arm by picking off two runners at first base and throwing a runner out at third base. Griffis is a game-changer for the team as a catcher — she is a natural. She blocks everything, and if runners stray off the bases, with her arm strength and accuracy she’s a weapon for us.

The Bulldogs begin league play this week against Middletown Christian and Dayton Christian. My goal all year has been to ready this team for league play. I think we’re ready.

Last week’s nice weather, with the exception of high winds, led our boys and girls teams to outstanding performances this past Friday at the Waynesville Invitational. The girls team finished in fifth place among a highly competitive field, while our youthful boys team (one first-year senior) that is comprised mainly of ninth and 10th-graders, competed with strong efforts.

On the girls side, we had two multiple first-place winners, as senior Amani Wagner once again broke her own school record  in the shot put with a toss of 34´7˝ while also earning a first place in the discus. On the other end of the spectrum, ninth-grader Annlyn Foster was a double winner in the hurdles. Running the 100-meter hurdles for the first time ever in a high school race, she won a first place with a time of 17.5 and later followed up with a similar result in the 300 hurdles (51.0). The hurdle tradition continues, post Julie Roberts and Olivia Brintlinger-Conn.

The girls team also had two strong second-place finishes with senior Jasmine Davidson heaving the shot put to a distance of 31´9˝ and our newly formed 4 x 100 relay team of Annlyn Foster, Haneefah Jones, Amani Wagner and Ayanna Madison circling the oval in a time of 54.0.

Overcomming injuries, Madison finished sixth in the 100 meters and Haneefah Jones also ran to sixth place in the 200 meters. Jude Meekin earned a hard fought seventh-place finish in the 3200 (13:51). Jones also placed in the high jump.

On the boys side, junior Mark Bricker ran to a solid fifth-place finish in the 1600 with a personal best of 5:04. He also was part of a tandem consisting of Raven Campbell, Jakob Lara-Woodburn and Zach Lugo that ran a season best time of 9:34, placing fifth. Ninth-grader Ibi Chappelle showed flashes of brilliance by running to fifth-place finish in the 200 meters (24.6). Rounding out the scoring was Zach Lugo, who ran a 11:53 in the 3200 meters.

It was a pleasure seeing our youthful group of Fiinn Bledsoe, Phillip Diamond, Jay Millman. Gideon Naziri, Griffin Roberts and Michael Vickers not intimidated by the competition and putting forth a great effort in various events.

Junior Harper Mesure competed with vigor in the 100, 200 and shot put, showing marked improvement in each of his events.