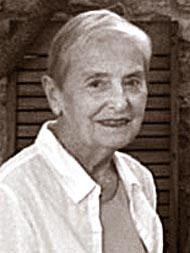 Marianne Grote passed away peacefully at Friends Care Center on Sunday, April 15, 2018. She was the beloved wife of Robert Grote for over 50 years until his passing in 2002. She was a loving mother to Mary Beth (Christoph), Joe (Mary Jean), Jim (Camden) and Matthew (Karen); a wonderful grandmother to Sean (Jean), Sonia (Matt), Sasha (Jimmy), Seth,

She was preceded in death by her husband, Bob, and great-grandson, Will.

Marianne was born July 2, 1929, grew up in Xenia, Ohio, and was a graduate of Saint Brigid School. She began her life in Yellow Springs in 1951 as the new bride of lifelong Yellow Springs resident Bob Grote. They built their family home at 102 Pleasant St. in 1953. They raised their four kids on that corner and it was a yearly spot for one of the Halloween bonfires.

Marianne was a talented wife and mother. She could knit, crochet, sew and quilt. Every one of her 10 grandkids received a hand-knitted blanket from her for their high school graduations. She was a Cub Scout Den Mother, a room parent, a teacher’s aide and a member of the Friendly Gardeners, where she was good at flower arranging. She was a voracious reader and a book club member. She helped her Bob with his company books.

Her church, Saint Paul’s, was a cherished part of her life. She sang in the choir and loved her years teaching second-graders in preparation for their first communions.

After Bob died, Marianne took a job at Town Drug and became a friendly face to all who came into the store.

She so loved the family vacations to her favorite spot, the High Noon at Lauderdale-by-the-Sea, Fla. As a woman of Irish descent, her trip to Ireland in 2007 was a highlight of her life.

She lived a long, independent life in her home until early 2018, when she entered an assisted-living facility.

Visitation will be at St. Paul Catholic Church in Yellow Springs on Saturday, April 21, 9:30–11 a.m., with her Mass of Christian Burial immediately following.

In lieu of flowers, donations in her name may be made to St. Paul Catholic Church, or to The Will to Choose ministry in honor of Will McAnaul — http://www.thewilltochoose.com or mail check to Patcine McAnaul, 44 Cypress Point, Amarillo, TX 79124.