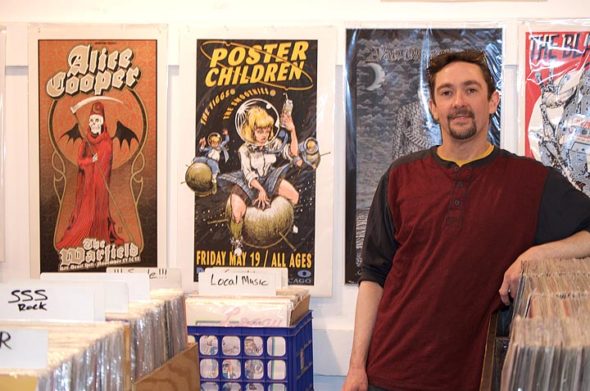 The third weekend of April brings with it Record Store Day, which Josh Castleberry, owner of Toxic Beauty Records, attributes with the exposure that put his store on the map. (Photo by Will Drewing)

Saturday will be a day for records

On Saturday, April 21 local record and poster store, Toxic Beauty Records will help vinyl record fans celebrate the day with concert ticket giveaways and limited edition releases. “We’ll have as many copies as we can of records that our customers want,” said Toxic Beaty Records owner, Josh Castleberry.

Those labels according to Castleberry follow a trend of jam bands including Phish, Grateful Dead and Arcade Fire. Notable limited releases this year include 1999 by Prince with a front cover that hasn’t been available on LP since its release in 1983, the 4 x LP recording of Grateful Dead’s performance at Fillmore West in San Fransisco on 2/27/1969, and the recording of Rage Against the Machine, Live At The democratic National Convention 2000. For a full list of limited edition releases visit Recordstoreday.com/specialreleases

Toxic Beauty Records opens at 9 a.m. this Saturday, April 21, and closes at 7 p.m. The line of excited costumers has started its formation outside of Toxic Beauty’s door at 2 or 3 a.m. in years past. “They’ll have a longer line outside the stores downtown,” said Castleberry, good advice to beat the record store wait.