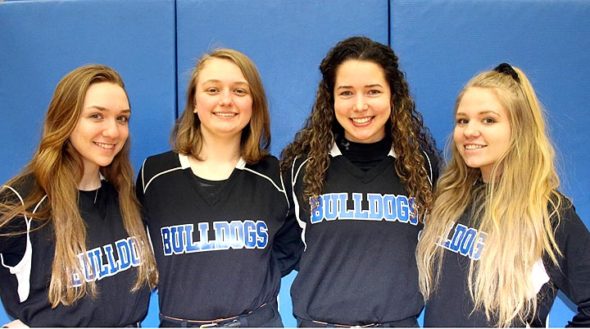 It’s a new season for the Yellow Springs girls softball team that won the Metro Buckeye Conference (MBC) last year for the first time in school history. In my seventh year at the helm as coach, it will be an interesting year. Eleven players are returning, including seven senior starters from last year.

Key to the season will be replacing the pitcher/catcher battery. Pitcher Hannah Morrison was the MBC Player of the Year, and catcher Danny Horton was a four-year starter at the position on the team that went undefeated in MBC conference play. The team has a good chance to repeat as champions; they’ll be right there in the mix with Dayton Christian and Middletown Christian for first place in the league. The team has a brutal schedule to begin the season, but it will definitely prepare them for the MBC games.

Junior Ashlyne Griffis and seniors Kadie Lafferty and Kallyn Buckenmyer have been working at the pitcher’s mound. Griffis is a hard thrower who took pitching lessons from Pete Cook in the off-season. Lafferty and Buckenmyer are finesse pitchers who rely on their control. Pitching is key to everything — the team will have its ups and downs at the beginning of the year, but once these girls get a little experience and confidence, they’ll be fine on the mound.

Catcher will be filled by a combination of players. Leading candidates are Janine Stover and Beca Spencer, and both have been working hard. Between those two and last year’s back-up catcher, Kadie Lafferty, the Bulldogs will have adequate catching this season.

The other keys to the success of this year’s team will be the returning seniors and their ability to hit and play defense. Leading the charge for the Bulldogs will be fourth-year starting second-base player Elly Kumbusky. She was named 1st Team MBC last year as she led the league in RBI’s with 27 and compiled an impressive .529 batting average. Kumbusky is the only returning captain and as coach, I’ve been leaning on her hard to be the team leader this season. Seniors Gracie Price and Kadie Lafferty were also named to the First Team MBC last year. Price is a defensive standout at first base who is a three-year starter at that position and hit .548 with 14 RBIs. I’ve coached high school softball for 13 years and Price is by far the best defensive player I’ve ever coached at first base and she’s also is a solid hitter. Lafferty is a four-year starter who plays shortstop and catcher and also pitches. Lafferty batted .426 last season and led the MBC in stolen bases with 20. Lafferty is the prototype lead-off hitter: a lefty who gets on base a lot and is the most athletic girl on the team. The team is counting on her to pitch and catch and play shortstop as well as be the lead-off hitter.

Senior Brielle Willis returns to the line up at third base. She was by far the most improved player on the team last year. She can fly on the bases and she has cat-like quickness at third base and a strong arm with a quick release.

Other players who will provide significant contributions are Kelsie Lemons, Janine Stover, Zoe Lafferty, Kallyn Buckenmyer, and Jorie Sieck. The team has a lot of depth in the outfield this year. Buckenmyer is a speedster, so she’ll be a key to the team’s defense but will also contribute on offense with her ability to get on base and steal a base. Stover and Sieck are two girls who have really improved in the off-season in both their hitting and fielding. Zoe Lafferty has shown a consistent ability to hit and field and brings the perfect attitude that coaches seek in all their players.

Other players who will get playing time are outfielders Sara Zendlovitz, Sophie Gisslen, Aailyah High, Hailey Burk, and Zay Crawford. The team’s numbers are good right now, with 16 girls on the team this year.