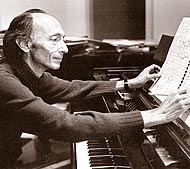 Donald Howard Keats, Ph.D., an award-winning composer, former professor of music at Antioch College, and longtime former resident of Yellow Springs, died on April 27 at the age of 88 following a period of declining health.

Dr. Keats was professor of music at Antioch College between 1957 and 1976. He and his wife, Ellie, raised their family in Yellow Springs, and delighted in its vibrant intellectual, musical and inclusive small-town community. At the time of his death, Dr. Keats was professor emeritus of composition at the University of Denver’s Lamont School of Music, where he taught between 1976 and his retirement in 1999, holding the Lawrence C. Phipps Chair in the Humanities for three years. He was also a visiting composer at the Aspen Music Festival for many years, where he taught a course in contemporary music under the auspices of the University of Denver.

Dr. Keats was born and raised in New York City, attending the High School of Music and Art and later graduating primi honoris at Yale University’s School of Music at the age of 19. He subsequently obtained a master’s degree in composition from Columbia University and a doctorate in composition from the University of Minnesota. Notable music professors with whom he studied include Quincy Porter, Paul Hindemith, Alfred Einstein, Leo Schrade, Otto Luening, Henry Cowell, Douglas Moore, Paul Fetler and Dominick Argento.

Dr. Keats was twice a Fulbright Scholar, twice a Guggenheim Fellow and an NEA award winner, with concerts devoted to his music in London (U.S. Embassy), Tel Aviv (U.S. Embassy), Jerusalem, (Khan Theatre), New York and at the University of Denver. He was also an accomplished pianist and conductor. His symphonic music — including his “Elegiac Symphony,” written upon the death in infancy of his first-born son — was widely performed, including by the Antioch College Orchestra, the Dayton Symphony, the Denver Symphony, Seattle Symphony, the Kansas City Philharmonic, the Oklahoma City Symphony, the Detroit Symphony and University of Minnesota Orchestra, among others. Dr. Keats’s most well-known work, his piano sonata, has also been widely performed; the sonata and his String Quartet no. 2 were commercially recorded. His music is published by Boosey & Hawkes, and he was a long-standing member of ASCAP.