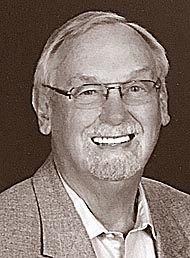 Bob was a 1952 graduate of Springfield High School and was granted a football scholarship to Auburn University. Following his first year at Auburn, he joined the U.S. Army and served for two years. Following his service, he entered The Ohio State University and earned his Doctorate of Optometry in 1961. Bob opened his practice in Yellow Springs, serving his patients for 50 years, retiring in 2011.

Not being able to stay retired, Bob practiced at Walmart in Urbana until 2014. He was an active member of First Lutheran Church and a former member of the Polo Club, Yellow Springs Lions Club and the University Club. Bob was an avid golfer and loved his fishing trips to Canada.

A gathering of family and friends will be held from 6 to 8 p.m. Thursday, May 24, at the Littleton & Rue Funeral Home, as well as one hour prior to the funeral service, which will be held at 10:30 a.m. Friday, May 25, at First Lutheran Church with Pastor Ali Mazzei officiating. Burial will be in Rose Hill Burial Park.

In lieu of flowers, memorial contributions may be made to your favorite charity.