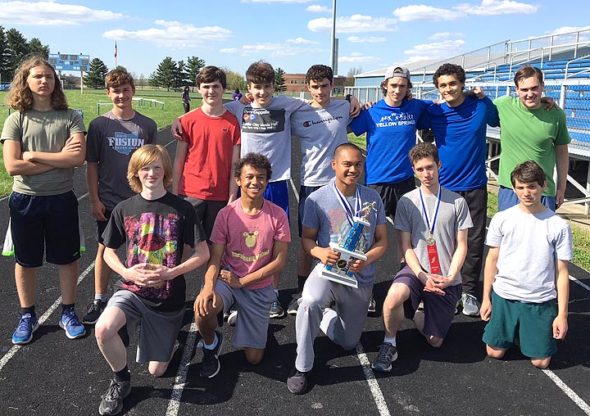 This week, the Yellow Springs High School baseball team suffered three consecutive losses, including an extra innings loss on senior night. First the players faced Temple Christian, who defeated them earlier in the year 4–3. This time the Bulldogs couldn’t keep the bats of Temple Christian quiet as they exploded for eight runs, defeating the boys, 8-4. The next day at home, the team lost 14–2 to conference rival Emmanuel Christian in a rough game.

On senior night, seniors Eric Romohr, Donnie Isenbarger, Zach Brintlinger-Conn, Julian Gundesweiler, and Tony Marinelli were honored. Unfortunately, the heart of the team, Travis Scarfpin, couldn’t be present. The team went toe-to-toe with Ponitz and tied things up heading to extra innings when Tony Marinelli was ejected, leaving the Bulldogs with only eight players. Ponitz took the lead on a ball to center field where the missing man should have been and the Bulldogs couldn’t rally to win it. The final score was 5–4. The Bulldogs play their tournament game at Tri-Village on Wednesday.

It was senior night last Thursday, and after a pre-game ceremony to honor the seniors, the girls softball team had their best offensive output of the season. Brielle Willis smacked a home run and drove in four runs as the Bulldogs scored a season-best 23 runs, waltzing to a 23–13 win over Ponitz.

The Bulldogs, who have seven seniors on the squad, jumped out to a quick 11–2 lead after one inning as they banged out eight hits in the first inning and used doubles by Willis and Kallyn Buckenmyer to spark the first-inning explosion. Kadie Lafferty, Elly Kumbusky and Gracie Price all scored two runs in the first inning to help jump start the team to the big lead.

“Our girls were psyched for senior night and they made it an enjoyable evening by producing 11 runs in the first inning,” said Coach Jim.

Ponitz tried to make a game of it in the second inning as they pulled within an 11–5 deficit with two outs and the bases loaded when second baseman Elly Kumbusky made a sparkling defensive play by picking off a sharply-hit ground ball to her left that appeared to be headed into right field and came up throwing to first base to get the final out of the inning.

Coach Jim commented: “That defensive play personifies how valuable Kumbusky’s quickness on defense is to our team. She’s been doing that for four years now. That play changed the momentum of the game and was a rally killer for Ponitz as two more runs would have scored and they’d still be hitting if Kumbusky doesn’t make that play.”

Indeed, with an 11–5 lead and momentum on their side, the Bulldogs responded with 12 runs over the next two innings to take a commanding 23–6 lead and then cruised the rest of the way to win by a final score of 23–13 to give the seniors a win on their senior night.

Senior Kallyn Buckenmyer was the starting pitcher and picked up the win for the Bulldogs and seniors Kadie Lafferty and Gracie Price came on in relief to finish the game.

Performing before a large crowd with 12 teams in attendance, the YSHS boys track and field earned a runner-up trophy at the annual Bulldog Invitational. The Bulldogs were led by ninth-grader Ibi Chappelle as he sprinted his way to a double victory in both the 100- and 200-meter sprints along with leaping his way to a third-place finish in the long jump. Junior Raven Campbell earned his first-ever individual title by winning the 800-meter run. In one of the most crowd-pleasing events of the night, ninth-grader Finn Bledsoe, competing for the first time in the race walk, hustled down the final straight to win the 800-meter race walk.

The boys 4 x 800 team of Campbell, Zach Lugo, Jakob Lara-Woodburn and Mark Bricker ran a season-best time while finishing in second place. Mark Bricker continued his steady progress this season by running to a second-place finish in the mile. Another talented ninth grader, Michael Vickers, walked to a third-place in the 800-meter race walk. Other performers earning points were the 4 x 400 relay tandem of Kaden Bryan, Jay Millman, Bledsoe and Bricker that finished in fifth place, and Lugo running a personal best in the 3,200-meter run with a sixth-place run. Griffin Johnson competed in the 300 hurdles for the first time and Harper Mesure earned personal best efforts in both the shot put and 200 meters. Phillip Diamond, Liam Hackett and Gideon Naziri ran in the 800-meter relay.

Amani Wagner once again won the discus and for the third consecutive meet set a school record in the shot put. Wagner also flashed her speed on the track by running in the 4 x 100 and 4 x 200 relays. Ninth grader Annlyn Jones, who competed for the first time in over a month due to injuries, earned a second place in the 300 hurdles and third place in the 100 meter. Jude Meekin flashed versatility with a second-place finish and season-best time in the 3200 meter while also finishing sixth in the pole vault and competing in the 4 x 200 relay. Senior Jasmine Davidson earned a well-deserved third place in the shot put. Another exceptional ninth grader, Haneefah Jones, competed in four different events with a second place in the long jump, second in the high jump, sixth in the 200 meter and was part of the third place relay team with Annlyn Foster, Jasmine Davidson and Wagner.

Other outstanding performances came from Mia Billiat, Lydia Fleetham, Deborah Isaiah, Oliva Mitchell, Ivy Tebbe and Ateerys Wagner. The girls team finished in third place, which ended their two-year reign as champions of this meet. Prior to the start of the meet, six seniors were recognized: Mia Billiat, Jasmine Davidson, Deborah Isaiah, Ayanna Madison, Amani Wagner and Jakob Lara-Woodburn. The Bulldogs will compete at the Metro Buckeye Conference League Meet on Saturday May 12, 10 a.m., at Cedarville University.