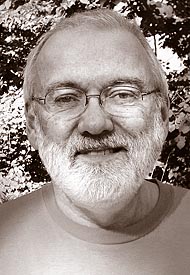 David L. Wilson, longtime Yellow Springs resident, died at Hospice of Dayton on May 22, 2018, after a severe stroke. David, son of John and Mary Wilson, was born on Aug. 16, 1944, in Dayton. He graduated from Patterson Co-operative High School in 1962, and went on to attend DeVry Technical Institute in Chicago. He served in the U.S. Army for two years, stationed in Germany, before his discharge in 1967. He was retired from Yellow Springs Instrument company.

David was the epitome of the self-educated man, and he also felt very strongly that he was a victim of the educational streaming prevalent in the Dayton City schools in the 1960s. He had a lifelong love of books, music and theater. He was a mainstay of Center Stage for many years, building sets and always available for last-minute emergencies. His reading interests were widespread, including science fiction and fantasy, mysteries, political analysis and religious history. He regularly attended OVFF, an Ohio folk music convention, as well as Marcon, held each year in Columbus. For decades he attended a Friday night play-reading gathering, where he became proficient in reading Shakespeare. Recently he began learning to play guitar and keyboard. He also volunteered each year at ComputerFest. A man of strong opinions about the current state of our republic, he particularly enjoyed discussing matters political at the Emporium many mornings.

David was a member of the Yellow Springs Dharma Center, where he sat regularly with the Sunday morning Vipassana Group. Always a willing hand, David worked with the Friday gardening committee, even though he freely admitted he could not distinguish flowers from weeds unless someone instructed him.

David is survived by his sister, Martha Valentine, of Rutherglen, Victoria, Australia; his nephews, Gregory Valentine, of Adelaide, South Australia, and John Wilson and Corey Wilson, both of Bulls Gap, Tenn.

A gathering of friends to celebrate David’s life will be held at the Yellow Springs Dharma Center on Saturday, June 16, at 11 a.m.