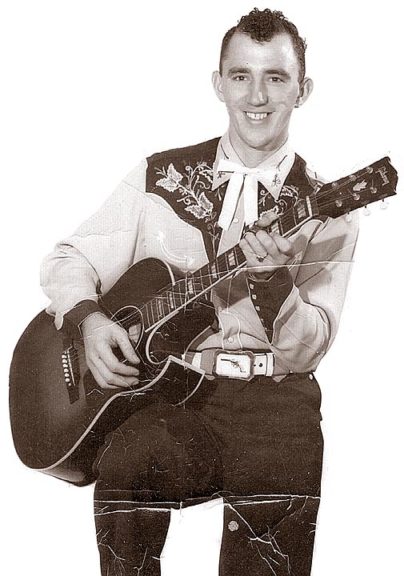 A lesser known famous musician with ties to the village is rock ‘n’ roll and country musician and producer Brien Fisher, here photographed with a Gibson CF-100 acoustic guitar sometime in the 1950s. Fisher was living on Livermore Street when he appeared on American Bandstand in 1957, and went on to become a successful Nashville producer. (Submitted photo courtesy of Kevin Fisher)

Tales of a forgotten music star

The list of famous musicians who have lived in Yellow Springs is long. Members of major rock bands like Buffalo Springfield, Jefferson Airplane, Country Joe & the Fish, and the Cars all lived here before they got famous.

Chris Till will give a presentation on the Rock ‘n’ Roll History of Yellow Springs at 6:30 p.m. on Monday, June 4, in the Yellow Springs Community Library. The one-hour talk will cover Brien Fisher, Chuck Berry, Mad River, the Medicine Ball Caravan and more.

Of that list, Brien Fisher is probably the most successful, but least known, famous musician to live in the village. Though he left town after a tragic crime decades ago, he eventually became an A-list Nashville record producer with more than 20 Top 10 country hits.

Even while living in Yellow Springs in the late 1950s, Fisher had a remarkable creative run. He co-founded a successful record label. As a singer, he released four singles, including a minor hit. As a songwriter, he wrote or co-wrote 20 songs that were released on a variety of record labels by a dozen artists, including a Top 10 country hit.

As there is almost no biographical information compiled on Fisher, it was only after interviews with two family members and six musicians who worked with him in the 1950s, as well as searching old news accounts, that the arc of his early career became apparent. Born in Tennessee in 1933, Fisher grew up just down the road from Yellow Springs in Goes Station, according to his brother Jack Fisher in a 2016 phone interview from Tennessee. After a decorated stint in the Marines, Fisher moved in with his parents, who had moved to Yellow Springs.

While 502 Livermore Street is well known today as the Yellow Springs Dharma Center, it used to be just a regular house. In 1955, it was the home of the Fisher family. Mrs. Fisher worked as a maid at Antioch College, cleaning dorm rooms. Mr. Fisher ran a taxi business out of the house. The younger son, Jack Fisher, joined the Navy, just as the older son, Brien, returned home. While Fisher made a living driving a taxicab in town, music was his passion.

“Music was what [Fisher] wanted to do, and that’s all he wanted to do,” said Yellow Springs guitarist Eddy Campbell in a 2016 phone interview. “Talk about a man who knew his music. He’d wake up singing.”

Even as a boy, Fisher loved music. As kids, “him and I and two cousins had a quartet, playing bluegrass gospel,” said Jack Fisher. Music ran in his family, as Fisher’s father, Rufus, was a gifted bluegrass gospel singer and amateur songwriter, according to Fisher’s son, Kevin Fisher, in a phone interview from Xenia.

Brien Fisher “was talented and ambitious,” according to Jack Fisher. Soon after moving to Yellow Springs in 1955, Brien Fisher began to put both his talent and ambition to work.

In early 1957, Fisher co-founded Spangle Records. Over the next two years, the Springfield, Ohio-based label produced 16 records, both country and rock ‘n’ roll. Brien Fisher wrote or co-wrote over half of Spangle’s songs, with his best being Rocky Rose’s stirring “Midnight Sun.” Because it lacked national distribution, Spangle had a clever business plan of recording original songs with unknown young singers and then selling the master recordings to bigger labels.

“Back then, you could cut an artist [in Nashville] for not very much,” said famed Nashville session pianist Pig Robbins in a 2017 phone interview from Tennessee, “and take it to New York City and sell it for a couple thousand.” At age 19 in 1957, Robbins’ very first recording session ever was a Spangle song Fisher co-wrote for the Sprouts, “Teen Billy Baby.”

In 1957 and 1958, Fisher recorded four records with Spangle. In September 1957, he appeared on American Bandstand, the biggest rock ‘n’ roll show in the country.  On national TV, he lip-synced his second single, the teenybopper rocker “Fingertips” — “Fingertips, your fingertips, the slightest touch makes my heart flip.”

Spangle successfully sold his third single, “Double Dating,” to a bigger label. Another teenybopper rocker, it offered the sage advice that “drive-in movies, dancing, skating [are] twice the fun when you’re double dating.” Despite some radio airplay, none of his three solo records charted nationally.

“Brien knew he didn’t have a great singing voice,” said Eddy Campbell, “but, boy, could he sing harmony.” Indeed, singing harmony as one-half of the harmony duo the Couplings on their modest 1958 hit, “Young Dove’s Calling,” gave Fisher his biggest chart success as a singer.

Two musicians who worked with him in the late 1950s each told stories of Fisher either driving drunk or recklessly speeding. This penchant for reckless driving eventually ended the first rise of music career and likely contributed to him leaving Yellow Springs.

Shortly before midnight on a Saturday night in January 1959, behind the wheel of his sleek Studebaker Golden Hawk, along with a musician friend and two young women, Fisher headed south on Xenia Avenue near where the library now stands. As reported in the January 22, 1959 Yellow Springs News, he then drove into an Antioch College freshman on her bicycle.

The bruised and cut Antioch student needed about 30 stitches in her face and neck, according to News articles. Brien Fisher and his friend left their two female companions at the scene and fled the state.

Soon after he got out of jail, Fisher had the biggest hit of his early career. Co-written well before the hit-and-run, Betty Foley’s rockabilly jaunt “Old Moon” hit the country Top 10 chart in August 1959 and became one of the most played country radio songs that year. With its success, Fisher left Yellow Springs for good, moving to Chicago with his wife and infant son, according to interviews with his longtime friend, the late Illinois songwriter Bernie “Hoot” Harville, Jr. There, Fisher built his own recording studio and slowly learned the craft of record production.

In the end, it took Fisher almost 20 years of dogged persistence before he had another hit. Then, beginning in 1977 with his Grammy Award-winning number-one hit for the Kendalls “Heaven’s Just a Sin Away,” he went on to produce 20 Top 10 country hits. Producing other country stars like Vern Gosdin and Bobby Bare, Fisher’s productions sold millions of records.

Though Brien Fisher died of prostate cancer near Nashville in 2016, he left a lasting legacy of music. His best 1950s songs, “Midnight Sun” and “Old Moon,” still resonate, while “Heaven’s Just a Sin Away” remains a country radio staple. After six decades in the music business, which finally culminated in success, it’s easy to see that Fisher did exactly what he was born to do: make music.

* Till is a music history researcher and writer who lives in the village.

2 Responses to “Tales of a forgotten music star”