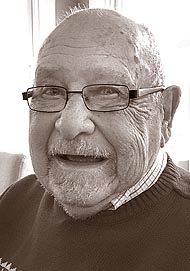 Ernie was born at home on Aug. 15, 1926 in Fairfield, Iowa, to the late Bertha (Stansberry) and William Heston. The youngest of five by 13 years, he was raised on a family farm and ran a general store.

He eventually enlisted and served from 1946 to 1947 in the U.S. Army-Air Force in World War II. He was stationed in Southern Germany, the Bavarian Alps, in the Supply Corps. Ernie supplied housing for the officers, worked with the mayor of the town to requisition houses in the village for officers, interpreted and selected their furnishings.

Discharged, he came home to Fairfield, and went to school full time on the GI Bill, in addition to working full time at Bradshaw Furniture where he learned interior design. Ernie earned a BA from Parsons College in 1951, and also went to Northwestern University, and Parson’s School of Design. After college, he became an interior decorator and buyer for several furniture stores west of the Mississippi, with his home base in the downtown at the Chicago Furniture Mart. He attended furniture markets, bought the coming years’ inventory, composed the newspaper advertising and promoted sales for each store.

In 1961, he returned to Iowa to manage a furniture store in Ottumwa. There he re-met “Frenchie,” or Marguerite Delpierre, his future wife, while she was working at the local TV station. They married that year. Then work took them to Moline, Ill., where they began having a family in 1962. They moved again to Martinsville, Ind. and had two more children, then to Muncie, Ind. where they eventually had two more children and made their home in the new Halteman Village.

Ernie became the manager and interior decorator at Country House Furniture where he worked for many years as a prominent designer of many homes, including the St. Mary’s Catholic Church rectory, among others. He continued to manage furniture stores and design until his retirement in 1988.

Upon retirement at 62, he joined VISTA (Americorps), and solicited businesses for donations, food, appliances, clothing, toys, etc. for homeless families. He also worked with homeless women and children in the shelter, providing childcare, jobs and education. When Maggie retired in 1996, they moved to Shamrock Lakes, their “little piece of paradise” in Hartford, City, where they built their retirement home on a lake. Ernie loved animals and Shamrock Lakes provided him with his favorite sport — fishing — and enough space inside and out to raise a variety of animals, including fish, koi, chickens, guinea fowl, fantail pigeons, love birds, canaries, finches and mallard and Peking ducks. He thoroughly enjoyed his many canine companions through the years, including Fritzi #1, Sammy, Fritzi #2 and Beau. Sammy loved to swim after the paddle boat or alongside the grandchildren swimming in the lake. Ernie and Maggie enjoyed hosting their grandchildren every summer for “Grammy Camp.” They stayed there until 2012, when they moved to Yellow Springs.