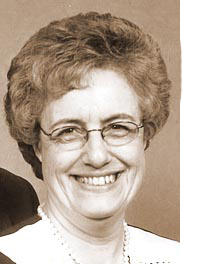 Carol retired from the US Bank in Yellow Springs after 45 years, was a member of the Aldora Chapter #262 Order of Eastern Star and a longtime member of the Cedarville United Presbyterian Church.

Visitation for family and friends was held at Jackson Lytle and Lewis Funeral Home on Tuesday, July 31. Funeral services were held on Wednesday, Aug. 1, at Cedarville United Methodist Church, with Pastor Anne Horton officiating. She was interred at Massie’s Creek Cemetery in Cedarville, Ohio. Contributions may be made in Carol’s name to the Michael J. Fox Foundation for Parkinson’s research or to Hospice of Dayton.