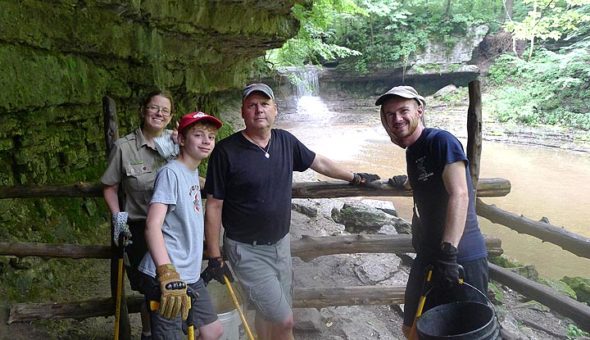 From left, Glen Helen Ranger Susan Smith picked up litter and cleaned graffiti in the nature preserve with volunteers Dean Alkire, Dave Alkire and Brad Arledge on one Saturday this summer. The weekly cleanup crew, known as Guardians of Glen, assembles every Saturday from 1–3 p.m., meeting at Trailside Museum. It is open to all, and gloves are recommended. (Photo by Nakia Angelique)

“It takes a village to keep the Glen clean.”
— Ranger Susan Smith

That week’s Guardians of the Glen volunteers were Dave Alkire and his son, Dean, from Mount Sterling, and Brad Arledge, a Wittenburg student. Regulars to the weekly cleanup, they have cheerfully donated their time to the effort for a little over a year.

The Glen’s guardians walk through the preserve each Saturday with buckets and trash bags, collecting litter and removing graffiti from the trails, off-trail areas, stone structures and bridges.

That Saturday, the guardians found cans, bottles, towels, shirts, socks, an entire cooler of beer and a full-body rabbit suit.

“I wish people would see it more as a nature preserve and less of a party place,” Smith said in response to the week’s impact.

Litter and graffiti in the Glen are up an estimated 60 to 70 percent in the last few years, according to Smith. The increase is tied to an uptick in visitors to the preserve, which the Glen has estimated at well over 100,000 per year.

In recent years, the popularity of the Glen on social media, especially Instagram, has brought more traffic — and consequently more litter — to the park, negatively impacting the fragile ecosystem and burdening staff, Smith explained.

If litter were less of an issue, Smith said, Glen staff could dedicate more time to other responsibilities, such as repairing broken bridges and walkways and removing invasive plants so native species can thrive.

“We ask people to stay on the trails,” Smith said.

Even with signs indicating protected habitat restoration areas and no swimming, it’s clear that many visitors break the rules and leave the evidence behind.

Nature preserves like Glen Helen are meant to be protected spaces for ecological restoration, native plants and the preservation of culture and history. The Glen, owned by Antioch College, is also a “living laboratory,” a place for student study. The preserve was a gift to Antioch College from Chicago attorney and Antioch alumnus Hugh Taylor Birch in memory of his daughter, Helen.

In addition to meeting community service hours, each volunteer shared more personal motivations for supporting the Glen that day. Alkire and his middle- school-aged son chose the park because of a love for the outdoors in general and a love for the raptor center in particular. Arledge, currently studying exercise science at Wittenberg, is considering becoming a volunteer ranger after graduation.

Smith, the Glen’s first full-time ranger, started the job in 2015. She had spent time in the Glen as a teenager before moving to Colorado for college. When she returned to the Midwest, a combination of her own love for the outdoors and good timing led her to the ranger position.

Throughout the cleanup, the volunteers were noticed for their service and were thanked by a few visitors, for “cleaning up the trash.” One curious couple asked, “What are you looking for? Are you capturing something?” to which Smith replied, “the invasive water bottle.”

Smith invites all visitors to help steward the Glen.

The Guardians of the Glen meet every Saturday from 1 to 3 p.m. All are welcome to join.

* The author is a local plant lover, writer and devoted dance student who enjoys sharing stories and exploring perspectives that inspire.