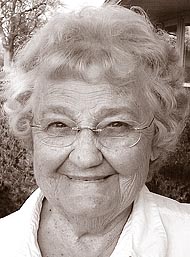 Beulah was a graduate of Bryan High School, Yellow Springs, class of 1946, and attended St. Leo College in Florida. Beulah worked as an administrative secretary at Antioch College, Wright-Patterson Air Force Base and the OS&SO Home in Xenia. She was a former member of Cedarville United Presbyterian Church and was a past matron of the Cedarville Order of the Eastern Star, and was honored with the Grand Cross of Color of the Xenia Order of Rainbow for Girls.

Beulah was loved by everyone who knew her and will be missed greatly by all.

Calling hours were held Monday, Oct. 1, at McColaugh Funeral Home. Burial will be at the convenience of the family.

In lieu of flowers, donations may be made to the Bryan High School Alumni Association, 3961 E. Enon Road, Yellow Springs, OH 45387. Online condolences can be made at http://www.mccolaughfuneralhome.com.