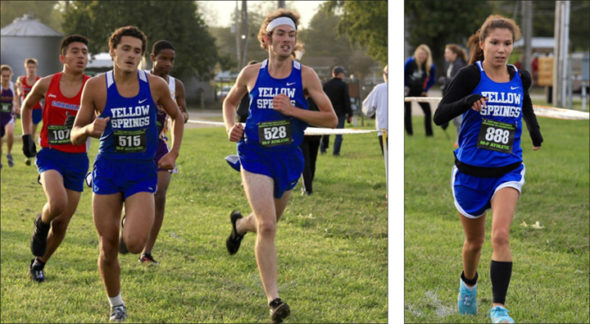 Left: Yellow Springs High School runners Mark Bricker, left, and Zach Lugo pushed themselves to personal best times at the home meet at Young’s Dairy last week; they finished the 5K in 17:59 and 18 minutes, respectively. right: Jude Meekin led the girls team with a third-place finish in the 5K race, coming in with a time of 21:28.
(submitted photos)

SOCCER
Boys head to district finals
After cruising through the first round of Division III, Region 12 sectional play last week against Southeastern (10–0), the Yellow Springs High School boys soccer team took on tougher squads, but came away with two victories during the week.

The fifth-seeded Bulldogs now head to the district finals, where they play number- three seed Cincinnati Madeira. The game is Thursday, Oct. 25, at 7 p.m. at Hamilton High School.

Girls season comes to a close
The YSHS girls soccer team ended its season with a sectional loss on Saturday, Oct. 20, to Jamestown. The team was defeated 10–1.
— YS News staff

While Head Coach Isabelle Dierauer planned for her team to be in peak performance around this time, she was genuinely surprised by the outcome.

“To me, it is unheard of that every single member of an entire squad runs a personal all-time best time at the same meet,” she said after the feat. “This is unbelievable.”

Bulldog Jude Meekin led the strong and compact girls high school team with a third-place finish in a time of 21:28. Freshmen Avery Reeder placed ninth in 22:01 and Evelyn Potter crossed the finish line in 22:07, placing 10th.

The high school boys team placed sixth as a team behind large Division I schools and demonstrated that this year, the Bulldogs are definitely one of the strongest small school teams in the region.
Senior Mark Bricker broke the magic 18-minute mark with a time of 17:59 in 17th place. His teammate, senior Zach Lugo, came in just behind him (18th place) in 18 minutes, just short of coming in under the high school “sound barrier” time.

Our runners ran against 37 other schools, in what was the single biggest field all year. The girls squad was led by senior and four-year letter winner Jude Meekin, who was ably followed by freshman Avery Reeder and first-year runner Evelyn Potter.

The boys finished in 23rd place and were led by the senior quartet of Mark Bricker, Raven Campbell, Eli Capasso and team captain Zach Lugo, running in their final high school race. They were complemented by junior Jay Millman and underclassmen Gideon Naziri and Griffin Roberts.
None of our Bulldogs advanced to the regionals but nonetheless acquitted themselves quite well with strong efforts.
— Assistant Coach John Gudgel

In the first round, on Oct. 16, the team defeated Sidney Fairlawn 3–2 before taking on Springfield Catholic Central on Saturday, Oct. 20. That match went four sets, with the Bulldogs victorious.
After taking the first two sets, 25–15, 25–21, the Bulldogs lost a hard-fought back-and-forth third set, 30–32. However, the team rebounded to win the fourth set and clinch the victory, 25–23.
— YS News staff