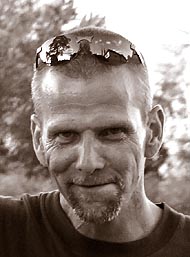 Steven Thad Johnson passed away on Oct. 8, 2018, in Dayton, Ohio. He was born in Salt Lake City, Utah, on Aug. 20, 1971. He moved to Ohio with his military family in 1979. After leaving the Yellow Springs schools in 1990, he became an apprentice stained-glass worker in South Carolina. There he worked exclusively replacing and restoring old church windows.

He moved back to Ohio and worked in a variety of construction fields, eventually focusing on building beautiful fences. His honest, committed, outstanding work ethic made sure he never lacked work when he needed it. Steven tinkered in everything large and small, from cars and computers to even a tiny nail that he needed. If it was broken, he would fix it. If it worked, he made it better. His creativity came out in his tinkering, his drawing and his cooking.

He loved to help. He fixed the neighbor kids’ bikes, while fixing a friend’s garage. Even when he had nothing, giving of himself without asking for anything in return was always something that brought joy to his day.

Steven would be the first to tell you that life was not always easy, but it was easy for him to find the living in life.

He is survived by his son, family and many friends who love him. A gathering will be held in December to celebrate Steven’s life; details forthcoming.

Donations can be made to your local homeless shelter or food pantry in Steven’s name.

One Response to “Steven Thad Johnson”