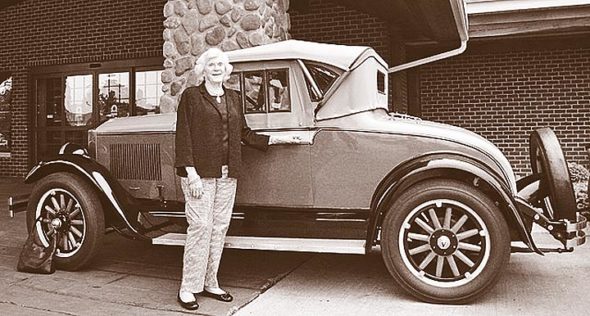 Fleury Velie Mackie and her roadster.

She was born in Moline, Ill., in 1926, the daughter of Martha Kelly and Willard Velie. She was the granddaughter of Edwin Kelly, the tire manufacturer, who commissioned Kelly Hall Auditorium at Antioch College. Willard, with his father, ran the Velie Motor Vehicle Company. Fleury lived in Yellow Springs from the age of 9, with her sister Demaris, after her mother Martha and her second husband, Philander Cable, bought the family home at Whitehall back from the bank after a mortgage default. They rebuilt it with the features that the house has today.

Fleury was educated at the Columbus School for Girls; the Foxcroft School in Middleburg, Va.; and Ogontz College in Pennsylvania. She met her first husband, Jack Valdes, at Princeton University. They moved to Princeton shortly after their marriage in 1949, where they raised their four daughters. In 1963, Fleury married Don Mackie, and expanded her family with four step-children.

Fleury was the beloved matriarch of her own family, and an extended family of friends. She was a charitable member of the Princeton community, and was known for her generosity towards many local organizations. In 2011, she wrote her autobiography, “Born Not a Moment Too Soon.” She was a great hostess, horsewoman, intrepid traveler, friend of many, mother and stepmother to eight, and grandmother to nine. She was proud of her Ohio roots, and would return yearly until she was in her mid-80s. Believing in farmland preservation, she was a supporter of the Tecumseh Land Trust. She was known to amuse her Eastern acquaintances with the pig calls that she learned on the farm as a child.

Fleury was predeceased by her husband, Don Mackie; her sister, Demaris Jenks; her daughters, Stacy Lorenceau and Victoria McKellar; and her step-daughter, Diana Mackie.