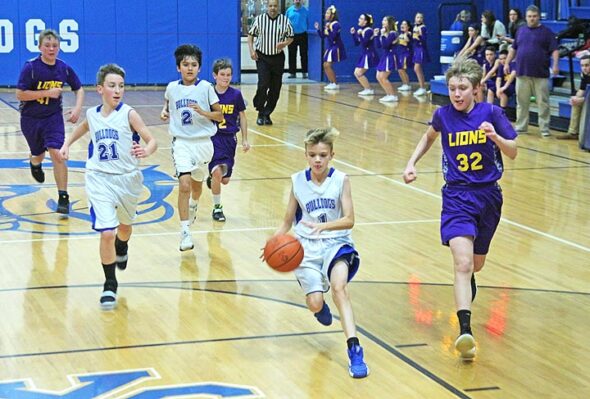 McKinney seventh-grader Sam Miller (center) goes for the fast break, backed by Brady Baker (#21) and Jake Ortiz (#2) in their win over the Lions on Monday. (Photo by Gary McBride)

On Friday, Dec. 14, the eighth-grade boys team played a conference game at Miami Valley Middle School and lost 44–25. The team played valiantly against a formidable opponent.

However, they turned things around on Monday, Dec. 17 when, along with the girls team, they swept the Emanuel Christian Academy Lions in conference action.

The Lady Bulldogs tamed the Lions in a tough match, 31–23. The seventh-grade boys won their back-and-forth game 29–27 with a lay-up by Jake Ortiz in the closing seconds. The eight-grade boys rode the momentum with a comeback 35–33 win over the Lions.

On Tuesday, Dec. 11, Yellow Springs played host to the Knights of Xenia’s Legacy Christian Academy. In the junior varsity matchup, a first-quarter three-pointer by junior Romel Phillips, and three second-quarter field goals by junior Kaden Bryan helped the Bulldogs lead the Knights 14–10 going into halftime. But Legacy Christian battled back in the second half, and despite a three-pointer by Sam Lewis, and individual field goals from Phillips, Sophomore Ibrahim Chappelle and Senior Tariq Muhammad, the Bulldogs ultimately came up short, falling to the Knights 32–24.

The Yellow Springs boys varsity team traveled to Miami Valley School on Friday, Dec. 14. Despite falling behind to the Rams as the game began, the Bulldogs battled back — aided by Anderson’s three first-half three-point shots — and the Bulldogs led the Rams as the second quarter clock ran out. But shaky passes and turnovers plagued the Bulldogs, and even Clark’s 20 points couldn’t quite carry the team to victory. Anderson would go on to score a season-high 17 points, senior Kevin Wagner added two free throws, Wallace contributed a field goal and a free throw, and Fultz scored a field goal in the loss to Miami Valley, 55–44.

Last Saturday, the YSHS Swim Team traveled to the Miami Valley YMCA where they took on Piqua, Casstown Miami East, and Sidney Lehman in a four-team invitational.  Both the boys and girls team swam with a full roster and took second overall in a meet that featured a number of thrilling finishes while teaching some early season lessons.

The Bulldogs will next be in action on Saturday, Jan. 5, at Wright State at noon, where they will take on nearly 30 teams in the Shawnee Invitational.