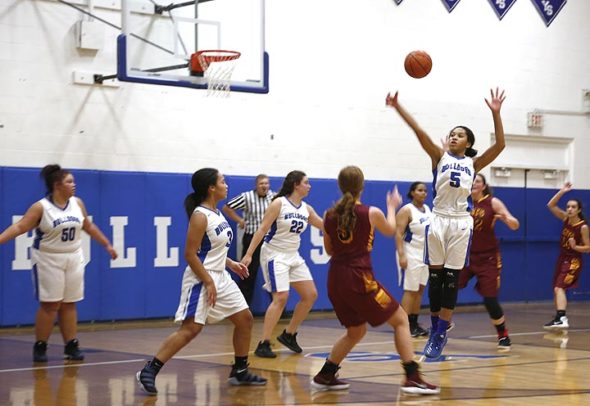 Angie Smith (No. 5) pulls down a rebound in the Bulldog girl’s varsity 46-44 win over Northeastern. Smith scored 31 points in the game, including two foul shots in the closing seconds of overtime. (Photo by Gary McBride)

Smith also hit the game-winning free throws with 2.6 seconds left in overtime to secure the 46–44 win.

Aaliyah Longshaw contributed to the victory with 11 points, and Channel Phillips made the game-tying free throws with 30 seconds remaining in overtime.

Missing three important players, Phillips, Izzy Ellis, and Amara Luckett stepped up for their team, according to coach Tim Minnich.

“I loved how hard my girls played, they never stopped and expected to win the game,” he said.

On the road at Graham, the YSHS boys varsity basketball team lost its season opener, 66–27.

Senior Andrew Clark scored most of the points for the Bulldogs, ending with 20 for the night. Freshman Demetri Wallace added three points and snagged four steals; Senior Trey Anderson made two free throws and contributed four assists, and senior Tariq Muhammad and junior Sean Adams both scored one point. Freshman De’Andre Cowen was out with an injury.

The Yellow Springs McKinney School eighth-grade boys basketball team opened its season on Nov. 29 with a win against Dayton Jefferson.

The Bulldogs brought home the conference win by a score of 46–23.

The team’s tenacious team defense was the key to the win. — Coach Steven Harshaw