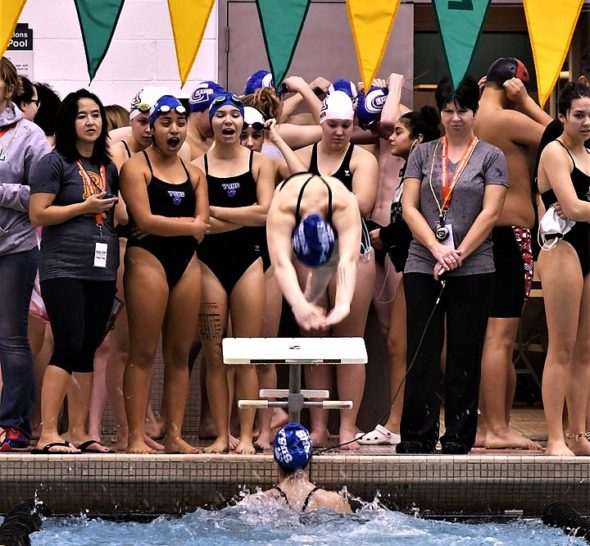 The YSHS Bulldog Swim Team competed in the Shawnee Invitational Meet at Wright State on Saturday and had several surprising finishes.

Out of roughly 25 schools, the boys team finished fourth overall, while the shorthanded girls squad finished a respectable ninth.

Individually, the team was led by David Walker, who bested 60 opponents in the event to take first place in the 100 free, along with a strong third place finish in the 200 IM. Both were lifetime bests.

Both teams featured a steady attack of strong relays, with all finishing in the top ten.

The Bulldogs return to action on Saturday, Jan. 12, at 6 p.m. at the Kleptz YMCA in Clayton, where they will be competing in the Northmont Invitational.
—Coach Bradley Martin

BASKETBALL
McKinney boys lose at Troy Christian
On Jan. 3, the McKinney School seventh- and eighth-grade boys lost basketball games to Troy Christian.
The seventh-graders had no substitutes, and with only five players, fought courageously, but lost 11–45.
The eighth-graders fell behind in the first quarter, 8–3, and fought back to tie the game at the half. The Bulldogs came out sluggish in the third quarter, fell behind by eight points, and could not make up the difference in the fourth quarter, only to lose by the final score of 33–41.
—Coach Steve Harshaw

Angie Smith was the leading scorer, with 36 points in the game, her second highest of the season.

Saturday, Dec. 29 brought the boys Bulldogs teams to Miami-East High School to take on the Vikings. The JV team was led by Phillips, who scored seven points, and Muhammad, who scored two field goals.
Sophomore Blaine Baker and Chappelle each scored a three-point basket. But the Bulldogs’ efforts were no match for the Vikings, who won 64–17. Bobby Crawford’s varsity team fared a bit better, with Clark leading the scoring with 15 points. Cowen and freshman Dimitri Wallace scored 8 points and five points, respectively. Anderson led the defensive effort with seven defensive rebounds. But ultimately Miami East triumphed, winning the game 42–28.
—YS News staff